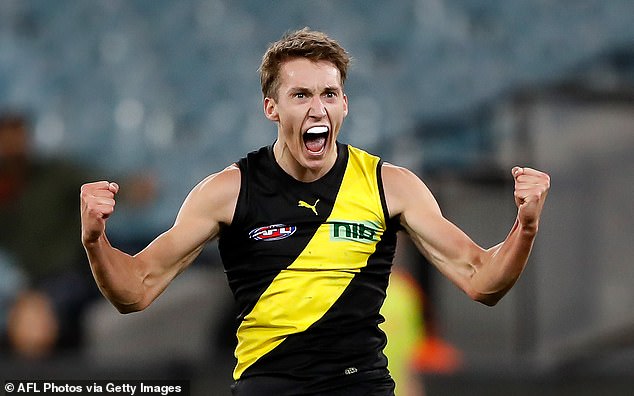 Judson Clarke enjoyed a dream AFL debut, booting two goals with his first two kicks in professional footy and sending his family into raptures in the process as Richmond beat Port Adelaide 77-65.

The 18-year-old made his first start for the Tigers at the MCG on Thursday night and was in the thick of the action in the first quarter, kicking his first major in AFL halfway through the first period.

Clarke converted the set shot to give the Tigers a 20-13 lead, much to delight of his family and friends in the stands.

‘You can’t help but smile and be excited,” Hamish McLachlan said on commentary on Channel Seven.

‘I feel really good for him. Got the handball away, I was pleased he did, then suddenly 15 seconds later, his first goal in AFL football. Brilliant stuff.’

‘He’s a pretty good kick, so I knew he was going to kick it,’ he told ABC.

Having got his first AFL goal out of the way, the teenager then slotted another major with his second kick in professional footy shortly afterward.

Again, wild celebrations among his friends and family ensued as the Sherrin sailed through the uprights.

Drafted with the 30th selection of the 2021 National Draft, Clarke spent the entirety of the 2022 season with Richmond’s VFL outfit, playing either as midfielder or half forward.

Last year, the Yarra Valley Grammar graduate played for the Dandenong Stingrays in the NAB League and was named in the competition’s Team of the Year.

Richmond’s VFL outfit coach Steve Morris has tipped the youngster for a bright future after he recovered from a knee injury.

‘His ball-use just stands out at this level and he continues to play his role diligently which holds him in good stead going forward,’ he said.

His two goals helped Richmond to a crucial 12-point win over the Power, as the Tigers clinched a fifth win in their last six games and climbed back into finals contention.

Richmond are now eight on the ladder and their finals credentials will be sorely tested over the next two weeks, with clashes against seventh-placed Carlton and fourth-placed Geelong.