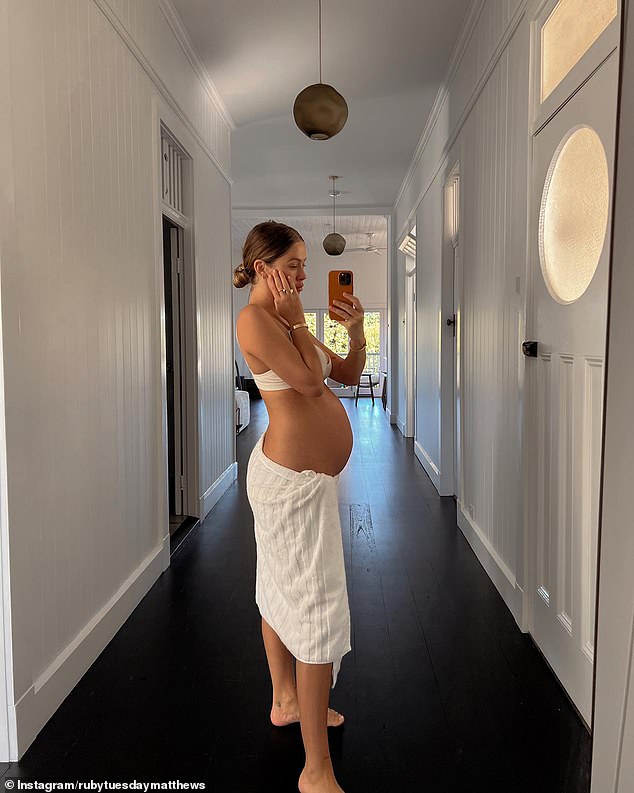 Ruby Tuesday Matthews is getting candid about her pregnancy struggles.

The influencer gave fans an update on her journey on Thursday as she prepares to become a mother of three, admitting her latest pregnancy is the ‘hardest’ one so far.

‘Hey, guys, it’s me. I know it’s been a while and thank you all for hanging in there,’ the 27-year-old wrote on Instagram, alongside a mirror selfie.

Hang in there! Byron Bay-based influencer Ruby Tuesday Matthews revealed on Thursday her latest pregnancy has been her ‘hardest’

‘I know my content may not be flowing at the moment, but to be honest this pregnancy has been by far the hardest,’ she added.

Ruby said she’d been suffering with anxiety and had been ‘feeling pretty blue at times’.

She also experienced hyperemesis gravidarum, or severe nausea and vomiting, ‘for the first 19 weeks’ of her pregnancy.

‘She still likes to raise her head occasionally, the b***h,’ Ruby said, referring to her unborn baby girl.

‘I honestly feel like I’ve lost a piece of myself this pregnancy,’ she continued. ‘Maybe I have and maybe it’s being passed on to my daughter so she can be extra fiery, driven and a true force to be reckoned with – pray for me.’

Blues: Ruby said she’d been suffering with anxiety and had been ‘feeling pretty blue at times’

‘Anyway I thought I’d get that off my chest. I hope anyone else going through the same situation doesn’t feel so alone,’ she concluded.

‘I’m definitely not your textbook, glowing rainbow mama-to-be. I hardly recognise myself anymore. But I really do know one thing: it will be worth it.’

Ruby’s post was flooded with supportive comments from fans and followers, with many saying they related to her struggles.

Sending love: Ruby’s post was flooded with supportive comments from fans and followers, with many saying they related to her struggles

‘I think you look incredible, and you are way too hard on yourself. I enjoy all your posts regardless.. and to be honest even if you need to vent it’s refreshing,’ another added.

A third commented: ‘Been there! I swear my girl pregnancy’s were the same. You’ll get through it. You are a walking talking vessel of magic right now.’

Ruby announced her pregnancy in April, sharing a black and white photo of her baby bump with her 233,000 Instagram followers.

A day after the announcement, she thanked her followers for their well-wishes.

‘A huge THANK you to everyone who has congratulated us,’ she wrote.

Baby No. 3! Ruby announced her pregnancy in April, sharing a black and white photo of her baby bump with her 233,000 Instagram followers

‘We are so excited to meet this little babe. I also can’t wait to fill this little room with all tiny tiny things. I can’t believe how much bigger I am this time! Anyone else double to size, second or third time around?’

In the last few months, Ruby has been showing off her bump and keeping her followers updated throughout her pregnancy journey.

This is her third child. She is expecting a baby girl with her fiancé Shannan Dodd.

The influencer also shares sons Rocket and Mars with her ex-partner Ryan Heywood.