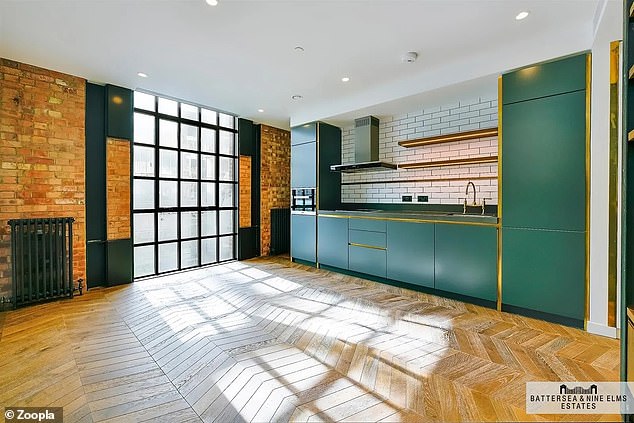 What does a studio flat cost around the UK? The average asking price hits £175,000… but this London pad would cost you almost £1M

The average price of a studio flat in Britain has reached £175,000, according to new figures.

The data provided by Zoopla was calculated using the median asking price of studio flats listed on its property website.

There are large regional differences in studio asking prices, with the most expensive average price of a studio outside of London found in the South East and East of England.

In both regions, average values have now reached £171,000, according to Zoopla.

At the same time, values in the East have risen by a larger percentage. They have increased 5.6 per cent in the past year, up from £162,000.

Similar percentage increases during the past year are also found in Wales – where average values currently stand at £104,500 – and in the North West, which sees asking prices currently at £95,000.

It is in contrast to the North East, where the cheapest average price of a studio can be found.

The typical asking price of a studio in the North East is £66,500, remaining unchanged from a year ago.

Values in Scotland are also unchanged from a year ago.

Among the smallest percentage increases is London, where the average studio has increased in price by just 1.5 per cent in a year.

However, house prices tend to be higher in the capital than in other parts of the country and London has the highest average studio price compared to any other region.

Zoopla explained that around 50 per cent of studio supply is based in London and the South East.

Studio flats can have a light and spacious feel, while offering plenty of storage (scroll down for more details on this studio)

Richard Donnell, of Zoopla, said: ‘While the UK average price of a studio has hit £175,000, this figure reflects that most studios are in London and around the south east.

Studio with a £995k asking price

We take a look inside a studio flat in London that costs more than five times the average price across the rest of the country.

It is not rare to find a studio in London with an asking price of around £1million or more – and this studio is no exception.

This studio (also pictured above) is on the market for £995,000 and is being sold by Battersea & Nine Elms Estates

The studio boasts 629 square feet, which is larger than some one-bedroom flats

The agent explains that the studio features ‘fully integrated appliances in the kitchen including a dishwasher’.

It has access to a residents’ gym and pool, along with a 24 hour concierge.

Buyers have access to several luxury residents’ facilities, including an indoor swimming pool

For those with a smaller budget, this studio flat in North Shields is for sale for £95,000 and is being sold by Hunters estate agents.

The studio is part of a new development and has a modern kitchen, as well as onsite parking.

For those with a smaller budget, this studio flat in North Shields is for sale for £95,000