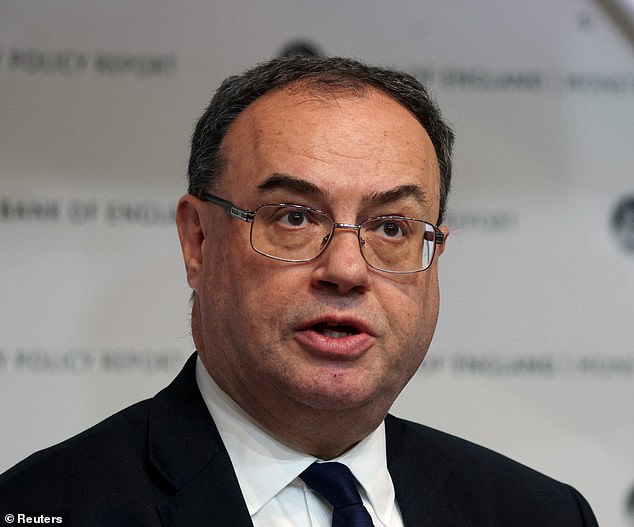 The Bank of England has come under fire over its handling of the economy as inflation spirals out of control and growth slows.

With the central bank’s monetary policy committee set to raise rates for the fifth time in six months on Thursday – to 1.25 per cent or even 1.5 per cent under some forecasts – critics accused it of talking down the economy with its doom-laden warnings.

Under pressure: The Bank of England’s monetary policy committee, led by Governor Andrew Bailey (pictured), is weighing up another rate rise from the current 1 per cent

And he said the pound has weakened ‘in response to the Bank’s ludicrous prediction of recession’ – pushing up inflation by making imports more expensive.

Simon French, chief economist at Panmure Gordon, also rounded on the Bank for its gloomy forecasts last month. ‘They set the economic scene with their communications, and real economic outcomes flow from their forecasts,’ he said.

The comments came as the Bank’s nine-strong committee, led by Governor Andrew Bailey, weigh up another rate rise from the current 1 per cent.

An increase would push up borrowing costs for millions of households and businesses.

The Bank is under pressure to act amid warnings inflation will top 10 per cent this year, having already hit a 40-year high of 9 per cent.

But it is feared that raising rates too far too fast will further derail the already fragile economic recovery from the pandemic and tip Britain into recession.