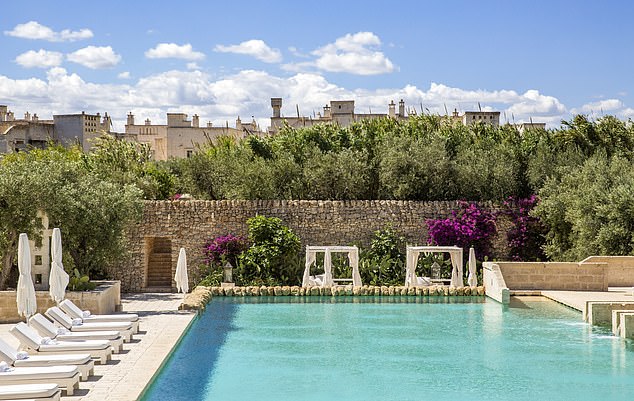 SPA DOCTOR: Feeling blue? Have a session with the Italian laughter master at Borgo Egnazia

By Eve Simmons For The Mail On Sunday

I first suffered severe anxiety long before it became trendy. Before celebrities revealed hidden struggles and reports told of a new generation of panicked youngsters.

For half my life I’ve been struck by feelings of extreme panic which leave me unable to socialise, sleep or concentrate on work. Nothing has cured it: intense psychotherapy, anti-anxiety tablets nor mindfulness meditation. My most recent bout of anxiety was a fortnight before my wedding. While the excitement of the big day was an effective distraction, the awful feeling lingered for weeks afterwards.

I’d do anything not to spend my first year of married life as a quivering wreck.

WHERE IS THE SPA?

Borgo Egnazia is a five-star resort near the coast in Puglia in southern Italy which, since opening its doors in 2010, has become a favourite with US pop royalty such as Madonna and Justin Timberlake.

It resembles a traditional Italian village but with plenty of added luxury. The restaurants offer largely vegetarian meals and a range of sporting activities are on offer and encouraged by staff.

While there is a separate spa, the entire building feels a little like one – the reception areas are dimly lit and candles flicker on every corner.

Borgo Egnazia is a five-star resort near the coast in Puglia in southern Italy which, since opening its doors in 2010, has become a favourite with US pop royalty such as Madonna and Justin Timberlake

As part of Borgo’s emphasis on restoring happiness, the spa offers a 90-minute session with the ‘Laughter Master’ who provides a one-on-one ‘unique movement experience’ in which you’ll be transported away from anxious thoughts.

The spa bosses tell me they can’t be entirely sure exactly what my session will entail, because everyone ‘needs something different’.

I walked into the studio and found the ‘master’ – Giuseppe – sat cross-legged, strumming a mandolin and chanting in Italian. My first task was to repeat the words he sang while raising my arms into a praying position. I caught my reflection in the mirror and immediately fell about laughing. Next we made odd, incoherent sounds which are impossible to make without screwing up your face so much you look like a prune.

As part of Borgo’s emphasis on restoring happiness, the spa offers a 90-minute session with the ‘Laughter Master’ who provides a one-on-one ‘unique movement experience’ in which you’ll be transported away from anxious thoughts. (Above, the ‘master’, Giuseppe)

Eventually we got into the bulk of the session, learning what I was told was a traditional Italian dance. Dancers must move slowly with their index finger pointing forwards in order to poke your partner before they poke you.

I spent ten minutes in fits of giggles, jumping about the room attempting to prod a stranger in the face while shouting mispronounced Italian words. I guess this means it’s working, I thought.

Giuseppe asked me to lean forwards, then take a step just as I felt I was about to fall.

‘When you feel you are falling, you can always stop yourself – simply by putting one foot in front of the other,’ he said. It rung true. No matter how scary something feels, nothing can stop you getting from one step to the next.

When my 90 minutes were up, my head felt clearer than it had in months. The stream of anxious thoughts had vanished. I can’t tell you how this happened, or why.

‘The experience of being pulled out of your comfort zone disrupts anxious or stressful thoughts,’ explains Erica D’Angelo, wellbeing director at Borgo Egnazia.

Or maybe sometimes we all just need a bit of silliness.

A 90-minute session with The Laughter Master costs about £190 (borgoegnazia.it).