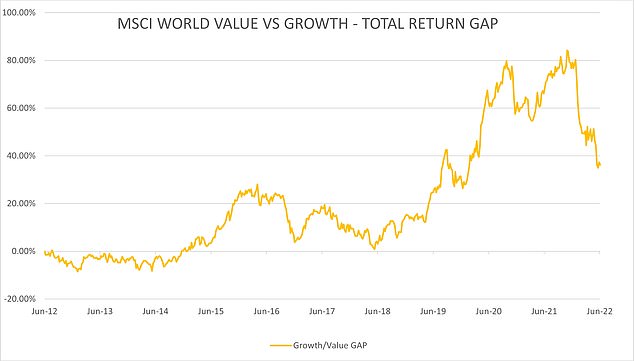 Over the past decade high-growth disruptive tech company shares have been pushed higher by return-hungry investors, while value stocks have been left overlooked and unloved.

Stock markets have, however, stumbled this year and the changed outlook for inflation and monetary policy means there has been a rotation away from the promise of future growth and into cheaper companies making profits now.

The difference in returns between growth and value stocks over the last 25 years has been cut in half in just six months as investors turned away from tech, according to analysis from Brewin Dolphin.

The gap in total returns – share price gains combined with income from dividends – between value and growth in the S&P 500 peaked at 472 per cent in favour of growth stocks last November. Since then, it has fallen to 221 per cent.

The picture is similar in the UK, which has been a beneficiary of the rotation given its tilt towards value.

Rising interest rates tend to favour value stocks over growth because they are less likely to suffer from the discounted value of future earnings.

The discount rate is an investment tool, widely used by big institutional investors, to determine the maximum they are willing to pay today for a return at some time in the future, taking account of the risks involved. It uses a risk-free rate of return as the baseline, which rises as interest rates rise.

The UK has done well out of the rotation out of growth stocks, with its higher exposure to traditional ‘old economy’ sectors including energy and financials and little exposure to tech.

Tech and communication, which are major growth sectors, represent around 36 per cent of the US S&P 500 and just 7 per cent of UK equities.

Since the start of the year the MSCI UK All Cap Index, which tracks the broad UK market, is up 3 per cent in total returns, while the S&P 500 is down 13 per cent.

Jason Hollands, managing director of Bestinvest, said: ‘The long unloved UK market is now one of the best performing markets year-to-date. And although the economic outlook for the UK is a concern, this should not deter investors as the UK market is incredibly international in nature with over 70 per cent of the earnings of UK listed business derived outside of the UK.’

One of the main things on investors’ minds is whether the sell-off has been overdone and if now is the right time to snap up cheaper growth stock investments like Scottish Mortgage.

Scottish Mortgage is the country’s biggest investment trust and has made big profits for investors by investing in a mix of global tech stocks, like Amazon, and startups.

But rising interest rates, a difficult geopolitical backdrop and a struggling Chinese economy, mean its shares have taken a beating. It is down 37 per cent in the year-to-date.

Baillie Gifford has stressed that the trust is for long-term investors but just how long will investors be waiting for it, and other growth stocks, to become more favourable?

In a recent analysis of Scottish Mortgage’s prospects and whether to buy in, experts canvassed suggested approaching any purchases with caution and a long-term horizon.

‘With inflation expected to linger at high levels for some time yet and the market expecting continued rate rises (in the UK these could reach 3 per cent next year), we believe the environment is likely to remain more favourable for value than growth stocks over the near to medium term,’ says Hollands.

‘It is too early to conclude that the growth stock slide has bottomed out yet, despite a bounce over the last week.

‘The price to earnings ratio globally for value stocks is circa 13.8 times earnings, roughly half that of growth stocks, which suggests there is headroom for a further narrowing of the historically wide gap that ballooned during the pandemic over the next few months.

‘This leads us to conclude that the UK remains a relatively appealing market, with high exposure to sectors like energy, materials, financials and consumer staples that typically prove more resilient in an inflationary environment.’

James Yardley senior research analyst at Chelsea Financial Services is more bullish on prospects for growth stocks particularly in the US.

‘Growth is still not cheap. There is little to support the new growth stocks with negative cash flows. There is much better value in big (US) cap tech. We think these stocks look cheap on a long-term view, but they could still go lower.

‘Stocks like Microsoft and Apple still trade on a big premium to their average historical multiple.

‘Overall, I prefer growth for the long term, but it’s a big call to say get back in now.’