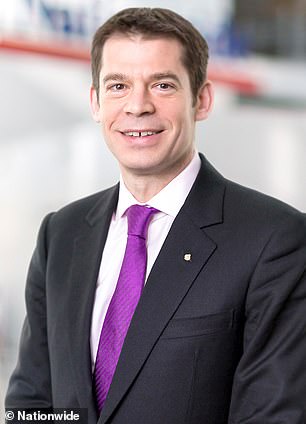 The chief executive of Nationwide Building Society took home a bumper bonus of nearly £1million before stepping down this month.

The 52-year-old left the mutually-owned business just over a week ago after six years at the helm, but not before earning a package for the year to this April that included a £954,000 performance bonus.

The reward is bound to antagonise many of the society’s 11million savers, who have received a pittance in interest in the past year.

Nationwide has raised rates, but still pays just 0.11 per cent a year on some instant access accounts. Since the Bank of England started to increase its base rate in December – it is currently 1 per cent – The Mail on Sunday has campaigned for banks and building societies to ‘Give Savers A Rate Rise’.

Under Garner, Nationwide has thrived with profit for the past year nearly doubling to £1.6billion and assets growing to £272billion. It has also just committed to keep open until at least 2024 a minimum of one branch in all cities and towns where it has a high street presence. This year, Nationwide has announced just ten branch closures while the big banks have confirmed 275 in total.

That will be welcomed by many customers who feared that, under new boss Debbie Crosbie, the society’s 625-strong network was under severe threat. In her last job at TSB she culled hundreds of branches. Crosbie took over at Nationwide on June 2, becoming the society’s first female boss in its 175-year history.

The society’s 16million members – savers and borrowers – have a chance to vote against the directors’ remuneration at next month’s annual general meeting. But as with all building society votes on executive pay, few members tend to register their disapproval.

Nationwide said: ‘Garner’s pay rise reflects a reduction in the last two years. We need to compete to attract talent to ensure the long-term success of a society of this size. We’ve always balanced how we reward people with our values as a member-owned organisation.’