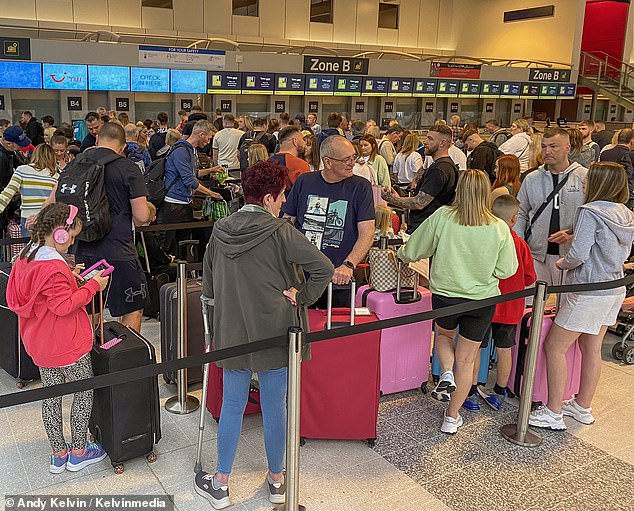 Don’t let plane or train misery hit your pocket: Why you should pay by credit card and check the small print  to beat the summer of travel chaos.

Unfortunately, escaping the mayhem is not going to be easy.

But you can still demand compensation if your travel or holiday plans are disrupted.

Chaos: But you can claim for cancelled flights that ruin your travel plans and holidays

Airlines often claim that ‘extraordinary circumstances’ – such as extreme weather or industrial action unrelated to them – are behind many plane cancellations and delays. This enables them to weasel out of paying compensation.

But staff shortages, airline strikes, overbooking, problems discovered in routine maintenance and delays caused by previous weather-affected flights are not ‘extraordinary circumstances’. In such situations, you can claim from an airline if your flight is cancelled or delayed three hours or more beyond a scheduled arrival time.

If a flight is delayed by more than five hours, you also have the right not to take it, but to claim a full fare refund instead. However, those who have already accepted an alternative flight should be aware they have waived a right to claim.

If your demand is rejected by the airline, you can contact the Civil Aviation Authority and ask its passenger advice and complaints team to take up the cudgels on your behalf. The authority also provides details on claim rules at caa.co.uk/ passengers. If it is unable to help, you can also take your case to dispute resolution scheme AviationADR. Sadly, travellers who miss a flight due to lengthy queues at the check-in or at security have no grounds for a claim. So turn up at the airport in plenty of time.

Nationwide railway strikes are due to start in nine days’ time – and continue on June 23 and 25. National Rail says that passengers who purchased tickets in advance for travel on those strike days ‘may be entitled to a refund’.

But the process for claiming varies between railway companies. If an alternative service, such as a bus replacement, is provided, any claim will only be considered if this is delayed or cancelled.

You should still contact the train company to see if you are able to switch trips to a different day at no extra cost.

Most train providers are signed up to a ‘delay repay’ compensation scheme. This entitles passengers to compensation equivalent to 25 per cent of the cost of a single journey if delayed between 15 and 29 minutes.

You must be delayed more than two hours to get a full refund of the return journey cost.

Only a third of all eligible passengers bother to claim as it often requires a form to be obtained from a local ticket office, filled in and then sent off along with supporting ticket stubs.

Some railway companies such as Greater Anglia now have smartphone apps which passengers can use to make a claim while still on a delayed train.

Take out comprehensive travel insurance. Check the policy small print to ensure it covers the cost of all travel failures. For example, not just the price of replacement flights, but other transport and accommodation costs.

Make sure the cover includes ‘scheduled airline failure insurance’. You may have to pay extra for this as a bolt-on – but it is money well spent.

Pay for your travel with a credit card. It means you may be able to claim under ‘section 75’ of the Consumer Credit Act 1974 if an airline or holiday company goes bust – or the travel trip paid for using this card is unexpectedly cancelled.

Know your rights. Do not allow airlines to fob you off with ‘extraordinary circumstances’ excuses. The Civil Aviation Authority has full details of when and how to claim.

If your airline rejects a claim you may take the case to AviationADR.

For train travel, demand compensation for any delays and cancellations via the train operator you used. These are usually signed up to ‘delay repay’ travel rules.