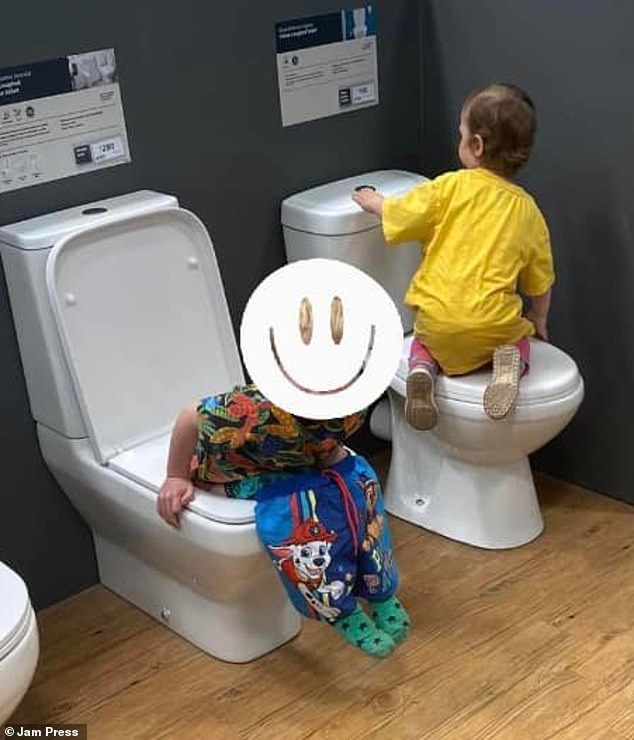 A young boy has left social media users howling with laughter after his mum revealed he relieved himself in a B&Q display toilet – with the parents forced to clean up afterwards.

Caroline Akhtar was at B&Q in Glastonbury on Saturday morning 11 June with her partner, Aaron, who goes by Azzy, and their four-year-old son, Jacob, and daughters Frankie, three, and Eliza, one.

The family had gone to the store to buy a washing line but ended up getting much more than they bargained for.

Speaking to Phillip Schofield and Holly Willoughby on This Morning, Caroline revealed that while his parents’ backs were turned, nature called and Jacob ran to a display toilet to do a number two.

Mother-of-three Caroline Akhtar was left mortified when her son Jacob, four, pooed in a display toilet at her local B&Q in Glastonbury

Caroline’s partner Azzy had to clean up after Jacob. After nature called in the store, the toddler’s first reaction was to go turn to the display toilet

‘They were just running around and next minute we notice Jacob, shorts down, sat on the toilet,’ Caroline recounted on the show today.

‘So we ran over, but it was just too late.

‘He tried to blame his sister. He said “She said it’s okay to use this toilet”,’ the mother-of-three chuckled.

She and Aaron said they were not reprimanded by the store’s staff or other shoppers.

Not your average Saturday task! Aaron had to use wipes and a zip bag in order to clean the display toilet in the store

Caroline said she hopes her son will find the anecdote funny when he is older, but assured the hosts he is already seeing the funny side.

‘He’s none the wiser about what he did,’ she said.

‘He already has such a funny, laid back attitude, he can laugh at himself, see the funny side of life, so I imagine he’s going to find it funny,’ she added.

‘It is a good story,’ her partner Aaron agreed.

Taking to Facebook to share the story, where it has since gone viral with over 15,000 likes, Caroline wrote: ‘Can’t quite believe what’s happened.

‘J has taken a very big poo in one of the B&Q display toilets.

‘Only went in for a washing line, turned around and J is sat on one of the toilets. Ran to say get off but it was very much too late.

Caroline admitted she had to wait for Jacob to finish his business, pictured, before she could remedy the situation

‘I left to get wet wipes and came back to him still sat on there because he “needed to finish” and hubby didn’t know what else to do.

The parents were ‘mortified’ at first but then saw the funny side of the situation – although they were less pleased when they had to fish out the poo from the toilet.

‘At first we were mortified but then we found it funnier and funnier,” Caroline said.

‘I quick paced back to the car park to get wet wipes and nappy bags and couldn’t stop laughing then.

‘He was still on the toilet so I proceeded to help wipe his bum still and explain about the toilets in shops are not actual toilets.

‘He said his sister, Frankie, said he could use it. Eliza was oblivious to it all and happy just playing on the toilets.’

Facebook users love the funny story, with the post having been shared 25,000 times on the the site.

‘Mate I’d have walked out! Sack that!,’ wrote one user.

‘This is legendary,’ added someone else.

‘That is the best thing I’ve ever seen,’ commented another person.

‘I have never laughed so much in my life,” added a fifth user, using laughing emojis to illustrate their laughter.

‘OMG, what a story this will make for when he’s older,” commented someone else.

‘Priceless,’ wrote another person, while someone else added ‘I laughed out loud A LOT’.

Others, who appeared to be parents, mentioned they could see their own children doing this.

And it appears Jacob isn’t the only one mistaking display toilets for the real deal.

‘We had that happen in Travis Perkins once, then the young lady wiped her bum with her teddy bear,’ one user shared of their own experience.