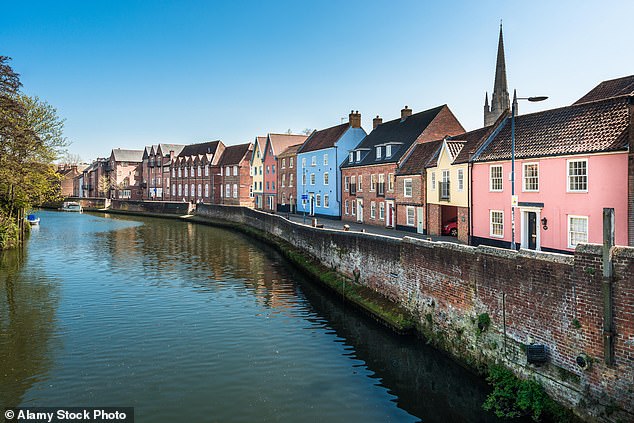 House buying has followed the same pattern since Rightmove began more than 20 years ago: as soon as you want a new home, you scour the internet. But not any more.

While most properties on sale are still publicised online, a growing number are on what some estate agents call ‘the hush market’ — it’s a secretive process with no For Sale signs, no property details printed, no pictures in agents’ windows, and no entry on Rightmove.

It’s all because of the current house buying frenzy.

Hush hush: Desirable homes are taking longer to sell on the open market so an increasing number of sellers are turning to the so-called hush market

Demand exceeds supply, and values are rising 10.5 per cent a year, according to data this week from the Halifax House Price Index, which shows a typical UK home hitting an all-time high of £289,099.

As a result, sellers know that they will almost certainly find a buyer, and quickly, especially if their home is in a popular area and has the must-haves of 2022 — three or four bedrooms, outside space, working-from-home potential and good transport links.

So instead of having to publicise their homes with all-guns-blazing — exposure online and in the local property papers — these sellers are relying on their agents having a waiting list of so-called ‘preferred buyers’.

These are would-be purchasers who do not need a mortgage, may well be renting to make the move more quickly, and are willing to pay over the odds to get the home of their dreams.

They will already have made friends with local estate agents, preferring personal visits to show their enthusiasm to buy, rather than relying on emails, calls or WhatsApp messages.

Agents have a nickname for such buyers — the Hot-To-Trots. James Greenwood of Stacks Property Search, a buying agency, says: ‘During the pandemic vendors were reluctant to conduct unnecessary viewings.

‘Off-market selling then became the norm.

‘Now, as demand has risen, vendors have found they are able to achieve well in excess of the asking price without having to go on the open market.’

His Stacks colleague, Emma Barkes, who works with buyers in the Cotswolds, has an example of just how frantic the normal market has become and why some sellers may prefer a more secretive approach.

She says: ‘A three-bedroom cottage with a small garden came onto the market earlier this year in Charlbury — a good small town near Chipping Norton with a train station — at £900,000. There were more than 70 viewings.’

Before the pandemic, off-market sales were mostly for the high-end seller with an expensive property who wanted to dip a toe in the water.

If their asking price was too high, but without any publicity, they would not lose face if they failed to find a buyer.

Buyers have been willing to pay a premium to secure their home off-market, and prevent sellers from marketing the property openly

But this year the off-market craze has extended to more mainstream homes according to research from the estate agency Hamptons.

And agents took an average of 42 days to find a buyer, compared to 65 days for homes more widely publicised.

‘And it has paid off. Buyers have been willing to pay a premium to secure their home off-market and prevent sellers from marketing the property openly to other interested parties where competition is rife.’

But not everyone believes that off-market selling gets the best price for the seller, especially in a busy market.

For example, one agent, who wishes to remain anonymous, says a pretty but run-down farmhouse in Cornwall was put on the public market last year for £600,000.

The South-West was hectic with city folk wanting to flee the pandemic and within just two weeks the property was sold to a London buyer who paid over £1 million to use it as a second home.

That may be bad news for local people priced out of their area, but it shows that the glare of publicity can sometimes create a buzz around a property, pushing up the sale price.

But whichever way a home is publicised, there is growing evidence that the housing market is coming off the boil at long last.

Russell Galley, author of this week’s Halifax index, says: ‘Mortgage activity has started to come down and, coupled with the inflationary pressures currently exerted on household budgets, it’s likely that activity will start to slow.

‘With overall buying demand down compared to last year, we may be past the peak sellers’ market.’

And with that peak passed, so the off-market sales phenomenon may ease as well.

‘With the number of homes on the market forecast to rise later in the year, buyers are likely to be more cautious about paying a premium in the face of an increasing amount of choice. If this happens, off-market sales may retreat,’ says Aneisha Beveridge.

So there may be just a short time left for ambitious sellers to try the technique.

Complete any outstanding odd jobs, declutter the living room, plump up the cushions and get ready for viewings — just don’t let the estate agent tell anyone who isn’t Hot-To-Trot…