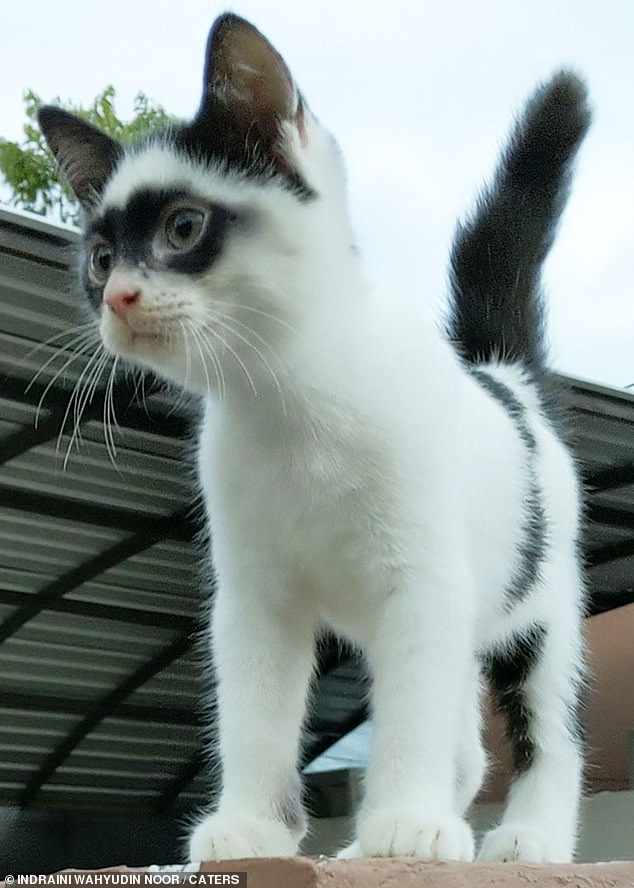 Meow-sk of Zorro! Kitten who looks like the masked hero due to his unusual face markings becomes an online sensation

A kitten has gone viral thanks to his unusual markings, which make him look like Zorro, the masked vigilante.

Indraini Wahyudin Noor, 50, from Banjarmasin, Indonesia, has several cats in his home, although it’s one particular pet who has gathered a lot of attention online.

One of Indraini’s youngest cats is Boy – the mixed Persian kitten, who is only nine months old, bears an unbelievable resemblance to Zorro.

Boy has a black patch around his eyes which looks just like a superhero’s face mask to cover the eyes.

Boy the kitten (pictured) has garnered an online fan base thanks to his unique markings, which make him look like the masked character of Zorro

The nine-month-old is one of several cats Indraini Wahyudin Noor, 50, from Indonesia, has in his home

According to Indraini, Boy (who many people call Zorro because of his markings), is his favourite cat

Indraini said: ‘The cat’s name is Boy, but many people call him Zorro. I have many cats but this is the only one who has a mask on his face. He’s my favourite cat!

‘He is a very spoiled cat, he always wants to be petted, cuddled and held. He likes to play a lot but he hates being bathed each week.’

After Indraini first shared some clips of the kitten on his social media, the videos went viral with tens of thousands of views.

Indraini Wahyudin Noor, 50, (pictured) has several cats, but says that Boy is his favourite among his pets

Social media users unsurprisingly love Boy, with some calling him the ‘cat thief’, and saying they want to hug him

Social media users were quick to comment on Boy’s clear resemblance to the masked crusader, and Indraini now regularly plays the Zorro theme tune to the cat to join in.

‘They even call him the cat thief! Reactions from my subscribers are mostly cute, they want to hug him and some even want to have him!’

A number of Boy’s fans have even told his owner, Indraini Wahyudin Noor, that they would like to have the cat themselves

Responses online to Boy (aka Zorro) have ‘mostly been cute’, according to his owner Indraini Wahyudin Noor, who says people want to have the cat themselves