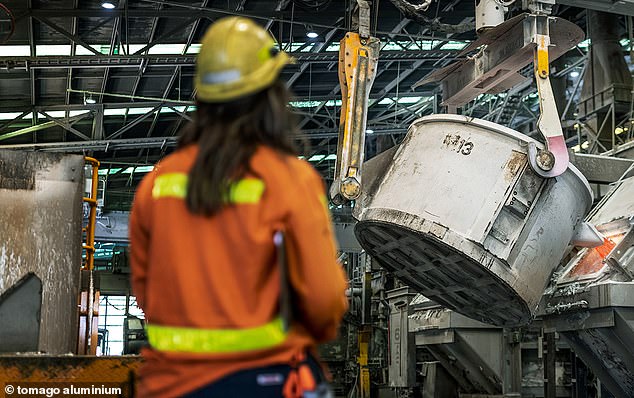 Australia’s energy crisis has deepened, with the National Electricity Market suspended, hospitals ordered to reduce electricity use and millions of people urged not to use basic appliances, despite the freezing winter weather.

Anthony Albanese and energy minister Chris Bowen will hold an emergency meeting with industry and union leaders on Thursday to discuss the growing crisis, which has been likened to the situation in ‘third world countries’.

The potential for mass blackouts has increased with about 1800MW of coal-fired power not operating in Queensland and 1200MW of capacity offline in the states of NSW, Victoria, South Australia and Tasmania.

The Tomago aluminium smelter in NSW, the country’s biggest electricity user, was also forced to cut production to reduce the chance of a blackout.

NSW Treasurer Matt Kean on Wednesday evening begged residents not to run dishwashers until late at night, and Sydney hospital staff were ordered to conserve power in all non-clinical settings.

‘This is the result of two-and-a-half decades of policy failures by all sides of politics,’ Victorian state Liberal MP Tim Smith said on Wednesday night.

‘Like a third world country, we are rationing power in the two first weeks of winter.’

The National Electricity Market has been suspended and hospitals were ordered to reduce electricity use. Pictured is the Tomago aluminium smelter in NSW, which was forced to cut production to reduce the chance of a blackout

‘We’ve got more uranium, oil, gas, gold, diamonds, whatever. We are the most … energy rich country on the globe,’ he told Sky News on Wednesday night.

‘We’re exploding with natural resources, yet we have an energy crisis. What a farce.’

Mr Bowen said though power outages had been avoided up to now, the grid is still vulnerable to unexpected challenges.

‘The system is under pressure,’ he said.

The Australian Energy Market Operator (AEMO) suspended the spot market in NSW, Queensland, South Australia, Tasmania and Victoria for the first time ever at 2.05pm on Wednesday.

It blamed the crisis on planned and unexpected coal power station outages, scheduled transmission outages, the early onset of winter and periods of low wind and solar output.

AEMO will apply a predetermined pricing schedule for each state, reportedly between $300MWh and $500MWh.

The figure will be based on the past four weeks of average wholesale spot prices.

Sydney hospitals were ordered to reduce their electricity. Pictured is the Royal Prince Alfred Hospital in Camperdown

The National Electricity Market has been suspended for the first time ever. Pictured: Bondi residents wrapped up warm on a cold morning

AEMO said the suspension, which will be reviewed daily, was needed to stabilise the National Electricity Market, which it said had become impossible to operate.

Who is to blame for Australia’s energy crisis?

Thursday morning’s emergency meeting will focus on how the market suspension will work, as generators and retailers work under the new regulations.

Business leaders have told the newly elected federal Labor government to regain control of the situation.

‘Worried energy users need confidence as the situation develops so they know what they will pay, that prices are not being manipulated and whether the lights will go out,’ said Australian Industry Group chief executive Innes Willox.

‘The detail of the AEMO market suspension will be completely arcane to most business and household energy users. They need confidence that the physical electricity system they depend on will not collapse,’ he said.

Liberal leader Peter Dutton also criticised the government, saying the crisis is ‘completely untenable’ and that businesses and families are facing huge pressure.

He said Australians should not underestimate how ‘precarious the energy market is right now’ and warned Labor wants to move power generation to renewables ‘too quickly’.

As Aussies shiver through the first two weeks of winter, households have once again been asked to conserve electricity for the next few days (pictured, a woman walking along a beachfront)

‘This energy crisis has emerged since the Labor government took over and it’s because, if you look at Chris Bowen he has levers in front of him though he doesn’t seem to know which one to pull,’ she told Sky News.

Though there were no blackouts on Wednesday, the crisis is still affecting daily life in several states.

Sydney hospitals were ordered to reduce their electricity use and millions of households across NSW were urged not to use their dishwashers.

Staff in the Sydney Local Health District were sent an urgent email on Wednesday asking that electricity be conserved in all non-clinical settings.

The National Electricity Market was suspended for first time ever on Wednesday. Pictured is the Bayswater coal-fired power station cooling towers and electricity distribution wires in Muswellbrook, in the NSW Hunter Valley region

Treasurer and Minister for Energy Matt Kean (pictured on June 15) asked NSW residents to reduce their electricity usage from 5.30pm to 8pm on Wednesday night

Employees were told to bring air conditioning units down to 20C and close blinds windows to ‘keep cool inside’, the Daily Telegraph reported.

‘Please activate the above measures immediately and we will advise you when these measures can be deactivated. It is likely this protocols will stay in place until 23.59 on Friday 17 June,’ the email said.

Staff were also asked to turn off electrical equipment not being used and to stop using printers as residents across NSW were earlier issued a similar warning.

A NSW Health spokesperson said NSW Health was taking steps to conserve and reduce electricity use where possible in its non-clinical settings but there would be no impact to patient care.

NSW Treasurer and Minister for Energy Matt Kean asked residents to reduce their electricity usage from 5.30pm to 8pm on Wednesday night.

‘If there is an opportunity for people to reduce their energy usage, so perhaps not using the dishwasher until you go to bed, that would help,’ he said.

Of the renewable sources, solar makes up about 37 per cent and wind 36 per cent. Pictured: A wind farm in Tasmania

‘This is the result of a number of our coal-fired power stations not working when we need them to do so,’ he said.

‘The number of the generators that were expected to be working tonight have not come on. This has changed the amount of supply that’s going into the system.’

Why did AEMO suspend the market?

Mr Kean said the suspension proved NSW needed to modernise its electricity system but said for now the focus would be on fixing the coal-fired stations.

‘We are focused on making sure we get through tonight and the next couple of days,’ he said, adding he would continue to work closely with AEMO.

As Australians shiver through a record breaking cold start to winter, households have again been asked to conserve electricity in the coming days.

AEMO CEO Daniel Westerman said ‘by suspending the market, we are creating a simple process where AEMO has true visibility of which generators are available and when, in advance.

‘That visibility will help us to manage the system in real-time as well as to understand the balance of supply and demand in the period ahead.’

Mr Westerman asked NSW residents to ‘conserve energy where it’s safe to do so’.

He said the difference between supply and demand would be tightly balanced in the coming days, particularly in NSW.

On Monday night, parts of Sydney’s northern beaches were briefly plunged into a blackout while Queenslanders narrowly avoided the same fate.

On Tuesday, AEMO directed five gigawatts of generation through direct intervention to prevent blackouts after generators stopped supplying power because a price cap meant they would have struggled to make a profit.

‘It’s very challenging for generators to be expected to bring supply online,’ she told ABC Radio.

What is happening in the electricity market?

AEMO STEPS IN TO TAKE OVER ELECTRICITY MARKET

AEMO said it has become impossible to continue operating the spot market while ensuring a secure and reliable supply of electricity for consumers in line with the rules.

WHAT ACTION IS BEING TAKEN?

The market operator will apply a set price for the five states in the National Electricity Market, compensating the generators who bid into the market during the suspension price period.

It followed AEMO being forced to direct five gigawatts of generation through direct intervention on Tuesday and finding it was no longer able to operate the spot market or power system in this way.

The market will resume operating normally as soon as it is practicable.

AEMO has assured the federal government there will be enough power to avoid load-shedding or blackouts.