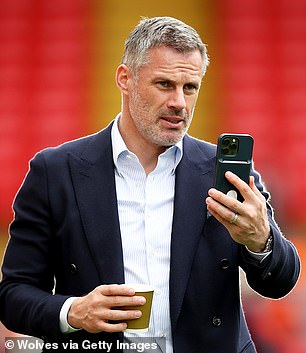 ‘Shut up you clowns!’: Jamie Carragher leaps to defence of England boss Gareth Southgate after fans chant ‘you don’t know what you’re doing’ during humiliating 4-0 defeat against Hungary… as Gary Neville calls for a ‘clear break’ at end of season

Jamie Carragher has leapt to the defence of England boss Gareth Southgate after he was met with a chorus of boos following the humiliating 4-0 defeat by Hungary.

The Three Lions capitulated on Tuesday night at Molineux, conceding three goals in the final 20 minutes as they suffered their worst home defeat in 96 years.

It caps a torrid end to an underwhelming four games for Southgate’s side and with fans chanting ‘you don’t know what you’re doing’ in the manager’s direction, ex-England international Carragher insisted Southgate had actually ‘overachieved’ during his time in charge.

The Three Lions capitulated at Molineux, conceding three goals in the final 20 minutes

Carragher said on Twitter: ‘”You don’t know what you’re doing.” Shut up you clowns.

‘This manager has taken the country in two tournaments to the best positions since 1966.’

In a second tweet, he elaborated: ‘Also this idea that Southgate is holding this group back is nonsense, this squad is no better than 2004/6 1996/98.

‘Southgate has overachieved albeit with favourable draws. Rest up boys & come back to your normal level.’

Southgate led England to the 2018 World Cup semi-finals and the final of Euro 2020, where they missed out on penalties against Italy.

Carragher’s fellow pundit on Sky Sports, ex-England and Manchester United right back Gary Neville, was more diplomatic however, insisting he felt ‘sympathy for the fans and for the players’.

He added: ‘This isn’t right. Players/Coaches will have to collectively come together to start to influence the programme to get that clear break..’ after another gruelling domestic season.

Southgate accepted ‘results were his responsibility’ after the defeat, adding that he was ‘hurt’ by the boos and taunts he faced.

The record-breaking hammering – the first time ever England had lost a home match by four or more goals without scoring – rounded off an international break to forget for the Three Lions which has left Southgate seriously feeling the heat.

Southgate said: ‘In the end this is about winning matches with England, tonight was the sort of night a lot of my predecessors have experienced.

‘I’m not going to stand and say it doesn’t hurt but it’s clear to me what we tried to do across these four matches, the two Nations League games have heaped negativity and pressure onto us and don’t normally have that with an England manager.

‘The players have never stopped, results are my responsibility. I understand tonight is a chastening experience. This group of players have been unbelievable for their country. It’s important people stick with them as they’ll be strong moving forward.’

Captain Harry Kane insisted under-fire Southgate retained his full confidence. He said: ‘Without any question. It’s not a question I should be answering.’

Kane added: ‘It’s our first big defeat in a long time. Our defence has been the structure of our success the last four or five years. We have to take it on the chin, move forward, preparing for a big World Cup and that’s the most important thing.