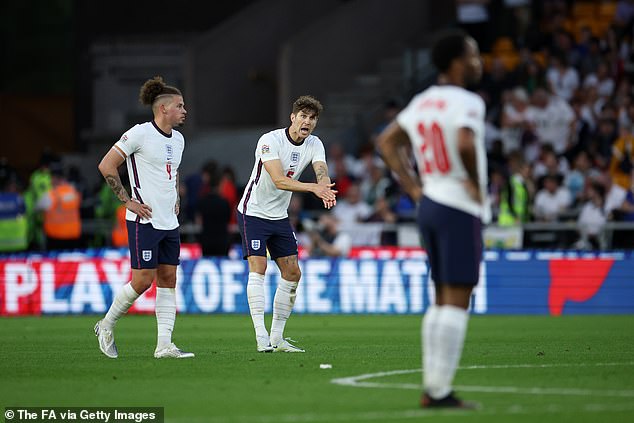 Joe Cole has ripped into England’s performance in their 4-0 defeat to Hungary, but has insisted that it is too early for panic.

Manager Gareth Southgate was met with a chorus of ‘you don’t know what you’re doing’ chants from fans inside the Molineux Stadium as England suffered a humiliating defeat on home soil to end a disappointing international camp.

After the match, Cole jumped to the defence of Southgate despite criticising England players for their displays.

He told Channel 4: ‘The performance tonight was shocking. The players weren’t at it, we have to accept there was no cohesion.

‘The attitude was wrong from the start, they weren’t at it, weren’t aggressive all the things that we ask from the team.’

He went on to add: ‘For fans, i can understand the frustration but you have to put some perspective on it. Gareth Southgate does know what he’s doing, of course he does.

‘He and his staff have taken this group of players have taken this team to two semi-finals, one final. He’s our most successful manager since Alf Ramsey – that is factual.

‘Tonight, it was dreadful – they will get a dressing down and they’ll be feeling sorry for themselves.’

England have failed to win any of their four Nations League games during the current international camp, with draws against Italy and Germany sandwiched by two defeats to Hungary.

Southgate took responsibility for the defeat after the game as he aimed to give several young players a chance rather than play a full strength team.

Cole added: (The) Nations League has been a disaster from an England perspective, we haven’t scored goals or had that cutting edge but he’s (Southgate) right when he says we shouldn’t panic.’

The Three Lions did create some chances in the first-half, but went into the break 1-0 down after a goal by Roland Sallai.

In a dreadful second-half display, Sallai got his second while Zsolt Nagy and Daniel Gadzag also got onto the scoresheet.

Ashley Cole meanwhile said too many players were off it and will have to take the result on the chin.

He said: ‘Too many players were off it. They’ve been held responsible, they take it on their chin when they’ve not performed.

‘They will take it on the chin as they will know that wasn’t the standard that they’re expected to be at so it will be on reflection, look in a mirror and know they were off it. Do they have a few excuses – yes, and, I thought they came up against a Hungary team that were very hungry.

‘They had the desire. It was a big occasion for them, well organised, well disciplined and made it hard for England. If you have three or four players off it you will get punished.’

He also added that players are allowed to have off days like England have had in the past.

He said:  ‘I feel like they’ll have to pick the bones out of it, team selection, wrong choice to play certain players.

‘But they’re allowed to have bad games. Easy to dissect every move every player makes. but we’ve had off days.

‘It’s unfortunate it’s come today and off two disappointing results. They’ve been battered at home in front of fans but they’ll go again.’

It was England’s largest defeat at home since a 5-1 defeat to Scotland in March 1928 and the first time they conceded four goals on home soil since a 6-3 loss to Hungary in November 1953.