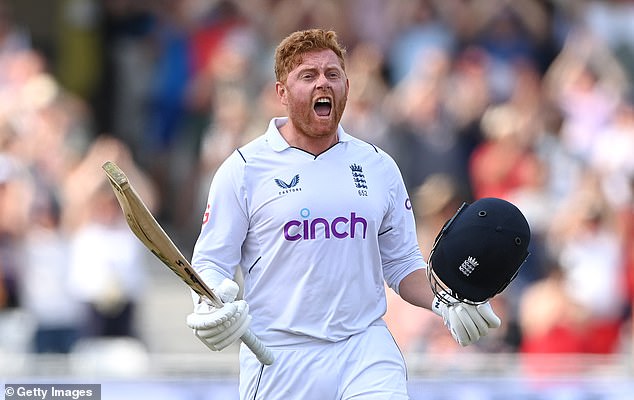 No surprise here! Jonny Bairstow insists the IPL (which paid him £700,000!) was better preparation for Tests than the county championship – despite scoring just 25 in his first three innings against New Zealand

By Paul Newman for the Daily Mail

Bairstow was thrown into the first Test against New Zealand at Lord’s immediately after returning from his T20 stint with Punjab Kings in India – where he earned £700,000 – and was out twice cheaply to loose shots. Along with his first innings score from the second Test, he mustered just 25 runs.

But he retained the faith of the high-octane new management team of Ben Stokes and Brendon McCullum and responded by smashing one of the best and quickest centuries of all time in Tuesday’s epic second Test victory over New Zealand.

‘There were a lot of people saying I should not be at the IPL and should be playing county cricket,’ said the Yorkshireman after coming within one ball of breaking Gilbert Jessop’s 120-year record for the fastest Test century by an Englishman.

‘But you are playing against the best in the world in the IPL and to have those gears, and being able to switch them up and down, is important.

‘People say it would be fantastic if you had four games of red-ball cricket under your belt before a Test series but unfortunately that doesn’t happen with current scheduling and we’re very fortunate to be able to play in some of the best competitions around the world.’

Joe Root has returned to the top of the world batting rankings after making his 27th and fastest Test century at Trent Bridge to follow his 26th and best at Lord’s.

Root has leapfrogged Australia’s Marnus Labuschagne in the ICC’s latest ratings and now leads him by five points.

The former England captain first held the No1 role in August 2015 and was last at the top in December 2021 before Labuschagne replaced him.

England have been fined 40 per cent of their match fee and penalised two World Championship points for a slow over-rate during their series-clinching victory at Trent Bridge. Match referee Richie Richardson deemed them to be two overs short.