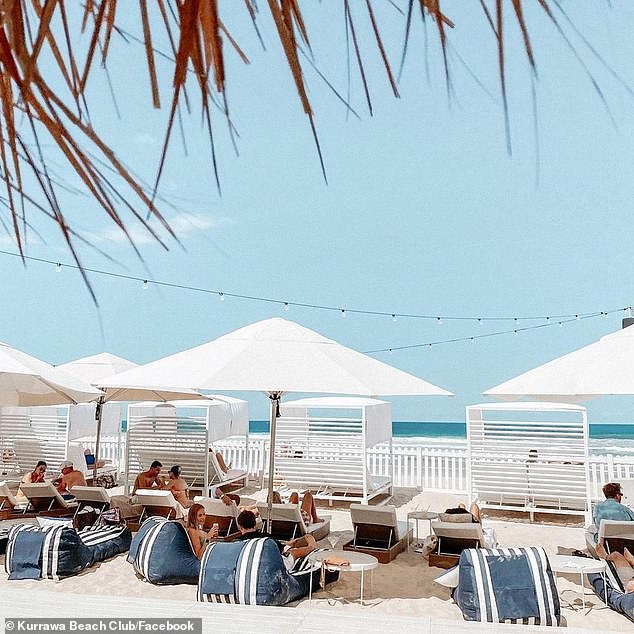 Private beach bar is SLAMMED by locals after it was given the green light to rope off a popular sun spot for the next three years: ‘It’s un-Australian’

A private beach club offering roped off access and waterfront cocktails has been slammed by locals after an ‘idiotic’ council decision to allow it to operate for the next three years.

Kurrawa Beach Club has been operating on a trial basis on the Gold Coast since late last year, drawing the wrath of those who fear it could lead to further privatisation of beloved Australian beaches.

The club offers private sun-loungers and even ocean-view cabanas on Kurrawa Beach to guests wanting a VIP experience, with drinks and food on offer.

But the local mayor insisted the club would not open the door for similar businesses to operate, after some locals feared it would open a ‘Pandora’s box’.

The decision was made by a majority of councillors which were in favour of allowing the club to continue running (pictured, a woman enjoying a day out at Kurrawa Beach Club)

‘I think council is out of touch with the community on this decision,’ Ms Spain told ABC News.

‘It opens the slippery path downwards for shops on the beach and that is something that the public are signalling they don’t want.’

‘The Australian icon of our free and open, non-paying, non-excluding beaches has been breached,’ Ms Spain added.

Gold Coast Mayor Tom Tate insisted it will not provide opportunities for other operators.

‘It is not for everyone’…’This is a measuring, planning instrument that we’ll be using specifically for the bar,’ Mayor Tom Tate (pictured) said

Mr Tate noted that the bar was situated at the back of the beach which has minimal impact.

‘We’ve got 55km of beach, I hardly think 150m is an enormous amount of stretch.’

While Mr Tate is not concerned about potential environmental impacts, Ms Spain believes more bars will pop up throughout the ‘beautiful state, thanks to the idiotic decision of councillors.’

This idea was further criticised by several local residents, who said the bar was ‘ugly’ and that there was a ‘stench’ nearby from the portable toilet.

Mr Tate said: ‘If majority of people say, “Tom we hate it, get rid of it,” then it’s gone (pictured, people enjoying themselves at Kurrawa Beach Club)