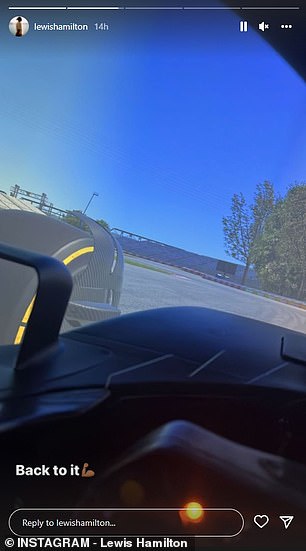 ‘Back to it’: Lewis Hamilton gets back behind the wheel following fears he would miss the Canadian Grand Prix after struggling with back pain in Azerbaijan… as Mercedes star looks to get season off and running in Montreal

By Kate Mcgreavy and Harry Slavin For Mailonline

Lewis Hamilton has returned to action by getting behind the wheel of a racing car – just two days after needing help to get out of his Mercedes due to back pain.

There were fears over the Brit’s participation at the Canadian Grand Prix this weekend after being seen nursing his injury following another miserable race in Azerbaijan last Sunday.

But Hamilton had already allayed fears he would miss the race in Montreal by giving an update on his fitness on social media and has reinforced he will be ready with his latest post.

The Mercedes driver uploaded a photo of himself back in driving action on Tuesday night alongside the caption: ‘Back to it.’

The Brit looked to be in some pain after the race in Baku, as he had to be helped out of his car by Mercedes staff.

The 37-year-old was seen holding his lower back as he walked away from his vehicle, and even in interviews with media later on his hand remained behind him.

‘There were a lot of moments when I didn’t know whether I was going to make it and if I was going to be able to keep the car on track,’ Hamilton said after finishing fourth.

‘That was the most painful and toughest race I have experienced.

‘I was just holding and biting down on my teeth due to the pain. The adrenaline helped, but I cannot express the pain that you experience, particularly on the straight here. I was just praying for it to end.’

And confirming the extent of the pain on Sunday night, Hamilton took to Instagram to deliver a message to his followers.

‘Seeing online that a lot of people are concerned about me with how awful it looked out there,’ he wrote.

‘It means so much that so many of you are sending love. I’ll be honest It’s [sic] looks terrible and feels 100 times worse.

‘Definitely some recovering and hard work with the team to do before Montreal to overcome this hurdle. Feeling better already, though, and motivated my [sic] to keep pushing. See you next week.’

He added an update on Monday morning, however, stating in his Instagram story: ‘Yesterday was tough and had some troubles sleeping but have woke up feeling positive today!

‘Back is a little sore and bruised but nothing serious thankfully.

‘I’ve had acupuncture and physio with Ang and am on the way to my team to work with them on improving.

‘We have to keep fighting. No time like the present to pull together and we will. I’ll be there this weekend, wouldn’t miss it for the world.’

Hamilton, the seven-time world champion, finished fourth after starting seventh on the grid, but there appeared a real danger that he would be unable to compete in Canada next weekend.

‘He is really bad,’ said his team boss Toto Wolff after the race. ‘You can see this is not muscular anymore. It goes properly into the spine and it can have some consequences.

‘The solution could be to have someone on reserve, which we anyway have at every race.’

Porpoising – a new phenomenon in cars for the 2022 season which sees them bounce on their suspension at high speed – has caused issues for a number of F1 drivers this season, including Hamilton.

The Mercedes driver has so far failed to launch any meaningful bid for an eighth world championship, and currently sits sixth in the driver standings, 88 points behind Red Bull’s Max Verstappen.