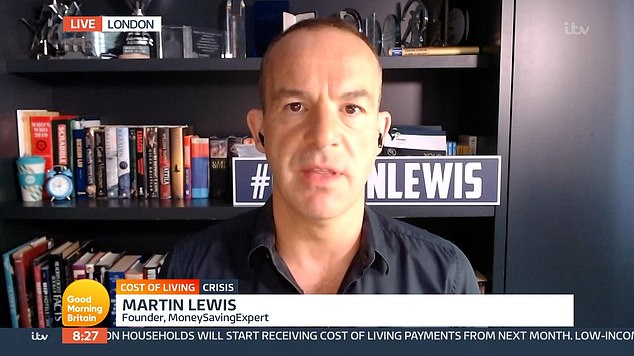 850,000 pensioners miss out on benefit worth up to £3,300 a year: Martin Lewis urges GMB viewers to claim pension credit – and says it’s a ‘gateway’ to getting help with other expenses

Martin Lewis has urged UK pensioners with a weekly income of under £200 to check if they are entitled to pension credit.

According to the money-saving expert, who appeared on Good Morning Britain today, around 850,000 people who are entitled to the benefit are not claiming it.

He added that while the average pension credit payout is £3,300, it’s a ‘gateway’ to other benefits.

Those those entitled to it must claim to be eligible for help with other costs, including TV licenses and council tax reductions.

Speaking on the programme today, which marks Pension Credit Day of Action, he said: ‘It is a national tragedy that up to one million pensioners are missing out on this rather substantial entitlement.

‘Many of those pensioners have been paying into the system for years.

‘What pension credit is meant to do, is to top people’s income up so if their state pension and other income is not enough, they have a reasonable standard of living.’

However, he added, it has been ‘tricky to get people to claim the entitlement’.

‘If you are of state pension age (66 or over) and you a have total income…of under £200 a week, I would get in touch with the pension credit system either online at gov.uk or [via phone by calling] the pension credit pay line and asking if you’re due money.’

WHAT IS PENSION CREDIT AND HOW TO CLAIM IT?

Pension Credit gives you extra money to help with your living costs if you’re over State Pension age and on a low income.

Pension Credit can also help with housing costs such as ground rent or service charges.

If you get Pension Credit you can also get other help, such as:

Housing Benefit if you rent the property you live in

Free TV licence if you’re aged 75 or over

Help with your heating costs through the Warm Home Discount Scheme

He added that not everyone with an income under £200 a week will be eligible.

However, he said, it is worth taking the time to check, as the average payout for those who are entitled to the help is £3,300 a year.

Martin added: ‘And it doesn’t stop there.

‘All of that is triggered if you get pension credit.’

He said people should call the pension credit pay line or check the website to find out.

According to Martin, although the line is called the ‘pay line’, it is a help service.

‘If you call up, they’ll talk you through it, and the worst that can happen is that they’ll say you’re not eligible.’

He said people who make the call would have details of what their income is, if they get any benefits, and what savings they have

‘That would be great if you have it when you make the call. But if you don’t have it, make the call,’ he said.

‘You can also go online.’

Reiterating that a significant number of people who are eligible for this benefit are not claiming it, he said this is a disaster given the current cost of living crisis.

‘I am very concerned about this winter for everybody, but with pensioners, I’m concerned and frustrated, because there are so many people who desperately need [this help] who aren’t claiming it.’

> Pension credit guide: What you need to know and how to claim it