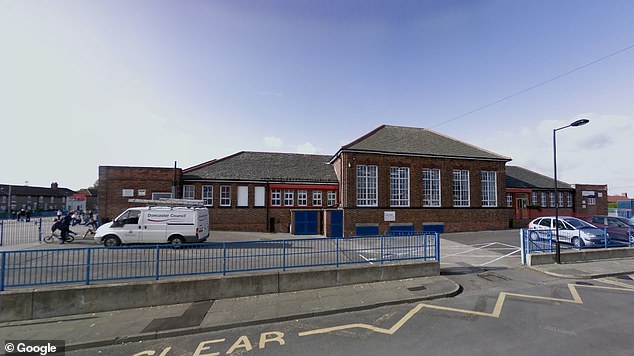 In an email, Woodfield Primary School in Balby, Doncaster, warned parents that while one of the attempted child snatchers had been arrested, the other remained at large.

A spokesman for Woodfield Primary School said: ‘We have been informed this morning that yesterday evening two men attempted to snatch two children of primary school age from Weston Road.

‘One was caught and arrested and the other got away.

‘Thankfully both girls are safe.

Two female pupils at Woodfield Primary School (pictured) in Balby, Doncaster, were the victims of an alleged attempted kidnap yesterday evening, with one male having been arrested in connection with the incident

‘Please be extra vigilant and ensure you report anything untoward to the police.

‘We strongly recommend that all children be collected from school by an adult over the age of 18.’

The incident comes just days after a man was arrested for attempted child kidnap in a separate incident.