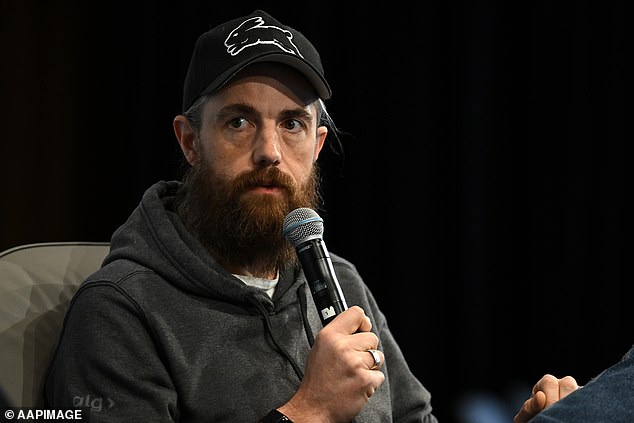 Tech billionaire Mike Cannon-Brookes says Australia has itself to blame for the current energy crisis.

‘At some point we have to admit we have made this problem ourselves,’ he told a business summit on Wednesday.

‘We got into this with 10-plus years of inaction.’

He said the cause is simple – not enough renewable energy in the grid, broken generators, and coal and gas are very expensive.

Tech billionaire Mike Cannon-Brookes (pictured at the ESG Summit on Wednesday) claimed Australia created the energy crisis issue due to an inefficient amount of renewable energy, using broken generators and relying on expensive coal and gas

The disruptive investor in Australia’s biggest energy company AGL earlier this year thwarted the company’s planned demerger, saying it was bad for shareholders, customers and staff, and ousted the leadership team.

Mr Cannon-Brookes wants to accelerate the closure of coal-fired power plants and, despite the failed buyout of AGL, is pushing ahead as the biggest shareholder in Australia’s biggest emitter.

‘We need to rebuild the board with a much more ambitious, forward-thinking, progressive board, for shareholders, for the environment and for workers,’ he said.

But the co-founder of Atlassian was coy about whether he would become a director.

He says he is putting forward strong candidates, but warned ‘this is not your standard ASX board job’ eating sandwiches and drinking coffee in the board room on the top floor.

‘This is the largest decarbonisation project in the world,’ Mr Cannon-Brookes said.

A clear closure plan for AGL’s coal-fired power plants could allow other projects to attract capital and become viable.

He said large customers had already told the generator they want 100 per cent renewable energy when their contracts come up in 2028 and 2029.

The Atlassian co-founder wants to accelerate the closure of coal-fired power plants and is pushing ahead as the biggest shareholder at AGL. (Pictured: Callide coal fired power station in Queensland)

Mr Cannon-Brookes was coy when asked if he would become a director for AGL. However, he said at the summit that he would be putting forward strong candidates

A partner in a separate giant solar project in the north that will connect to Asia, he said Australia also has an opportunity to create the country’s largest export industry with renewable energy.

Also speaking at the AFR ESG (Environmental, Social and Governance) summit, investment banker Catherine McCormack said a big pillar of the campaign to buy out AGL was the opportunity to support the energy transition.

She said companies had moved from having an ‘exit strategy’ to being part of decarbonising economies.

But there’s a real lack of policy from government on transition, she said.

‘It’s about bringing stakeholders together to at least try to put a policy framework in place.’

There is enough existing gas generation to support a grid that is 85 per cent powered by renewables, he said.

He also ridiculed nuclear energy on the grounds it’s an expensive source of energy that takes decades to build, compared to solar, wind and battery storage.

‘Especially in this country, it makes no sense, absolutely illogical,’ he said.

‘I estimate, unfortunately, that your power prices are going to go up quite significantly this year,’ he said to 7News.

As he did at the summit, the Atlassian co-CEO placed the blame on the cost of coal and gas, which Australia heavily relies on.

‘For two fundamental input reasons: the cost of coal and gas has gone up, and 65 per cent to 70 per cent of our grid is generated by coal and gas,’ he said.

Mr Cannon-Brookes referred his second reason to the ‘unreliable generators’ being operated by companies that have aged and gone ‘well beyond their useful life’.

He pointed out that he doesn’t ‘blame’ those using the machines but said as long as companies rely on aged generators they will gradually become ‘more unreliable’.

‘If it was all coal-generated, your bill would be going up even more,’ he added.