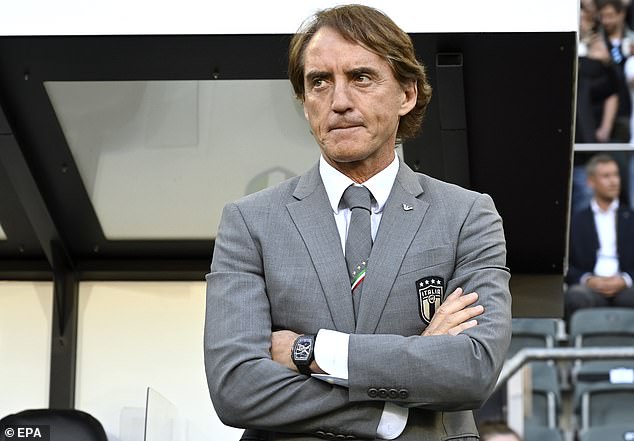 Roberto Mancini insists he feels ‘FAR more positive’ after Italy’s crushing 5-2 defeat by Germany than after the draw with England, as he claims he ‘expected to lose badly’ in Nations League tie

Italy manager Roberto Mancini believes there was more for the European champions to be positive about following their 5-2 thrashing away against Germany than last week’s stalemate with England.

Positivity is often a term reserved for celebrations of success, but the Italy manager switched tack as he outlined how he now has a deeper understanding of his side despite the heavy defeat in Monchengladbach.

Leading his team to Euro 2020 glory last year, Mancini has struggled to build on that success, failing to qualify for this year’s World Cup in Qatar and winning just one of their four recent matches in the UEFA Nations League.

The experienced manager deflected criticism following the defeat and instead insisted England’s 4-0 loss to Hungary on the same evening was a far more concerning result.

‘I feel far more positive today than I was after the draw with England or that 1-1 with Germany in Bologna, because I saw something in terms of our football, the tactical system.

‘We understood some important things. We learned we can defend with three at the back, there are other systems compared to the 4-3-3, there are players who we can introduce and we will get back to being a team that comes to Germany not to be dominated, but to take control and dictate the tempo.

‘There were positives despite the disappointment of the defeat.’

Italy previously held Germany to a 1-1 draw in the reverse fixture in Bologna, with many fans hoping the European champions would build on that result.

However, former Manchester City and Inter Milan manager Mancini never seemed to share the same optimism, with the 57-year-old revealing he expected to lose heavily against Hansi Flick’s side.

‘The truth is, I thought we’d lose heavily to Germany in Bologna as well. If we have five points after four games, it means we’ve done pretty well,’ admitted the Italy boss.

‘We’ve got to accept there will be these bumps on the road, but we need to go through this process to become a stronger team. At this moment, Germany are clearly on another level. There’s an enormous difference.’

Mancini had his excuses ready in the aftermath of defeat and pointed to the departure of long-serving stalwart defender Giorgio Chiellini as a key loss, while highlighting the importance of incorporating new players such as Giorgio Scalvini into the national team.

The 18-year-old central defender has become one of the hottest young names on the Serie A circuit after an impressive season with Atalanta and is now set to become a regular player in Mancini’s side.

‘There were positives too,’ Mancini added. ‘[Wilfried] Gnonto scored his first goal and was among the best performers on the night. Giorgio Scalvini did really well coming off the bench.

‘We saw him in training too, Scalvini is excellent both as a centre back and a midfielder.’