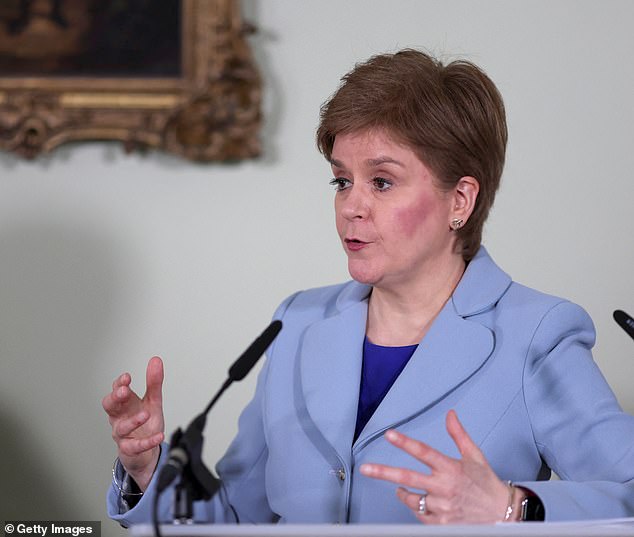 The SNP today upped the ante in the independence battle by claiming a referendum could happen in October next year.

The timetable emerged after Nicola Sturgeon launched a fresh push for a vote, despite conceding that ‘regulatory and customs’ problems would arise if Scotland split and joined the EU single market.

However, Boris Johnson has made clear he will not approve another referendum, saying the decision was taken ‘only a few years ago, in recent memory’.

And ministers insisted Ms Sturgeon must wait until 2039, after the 2014 contest was branded ‘once in a generation’ and resulted in 55 per cent backing the union.

SNP constitution secretary Angus Robertson laid out its schedule in an interview with Good Morning Scotland.

He said: ‘The First Minister made clear yesterday she intends to make an announcement to the Scottish Parliament in the forthcoming weeks about the route map to the referendum which we intend to hold next October.’

Boris Johnson has flatly refused to agree to another referendum

However, even supporters voiced scepticism.

Campbell Gunn, who was a special adviser to Mr Salmond and then Ms Sturgeon, said the ‘timescale is very difficult’.

Mr Gunn told the same programme: ‘We’re now 15, 16 months from when the referendum is likely to be held, we don’t have a section 30 order, it will probably end up in the courts.

‘I just don’t see the timescale working for the SNP.’

Commons Leader Mark Spencer was asked about Ms Sturgeon’s intensions yesterday, and said: ‘Once in a generation, I think, is certainly not five years,

‘I think that would be more nearer to 25 years before it should be considered again.’

Ms Sturgeon’s admission that there could be a hard border with England raises the prospect of Northern Ireland-style wrangling with Brussels over checks on goods.

But Ms Sturgeon insisted the obstacles could be overcome, and access to the EU market mattered more to Scotland.

‘Thanks to Brexit, the cost of living crisis is worse here than in any other G7 country – inflation in the UK is double that of France,’ she told a press conference at Bute House.

Ms Sturgeon published the first of a series of position papers designed to woo the Scottish public, with polls suggesting they do not currently favour the separatist agenda.

But her predecessor as First Minister, Alex Salmond, was among those demanding more detail.

He questioned how Ms Sturgeon could ‘bend Westminster to the will of the Scottish Parliament’ given Mr Johnson has flatly refused to agree to another referendum.

Ms Sturgeon merely said she would set out her approach in Holyrood soon, suggesting that a vote could happen even without the PM’s backing.

Opposition leaders accused Ms Sturgeon of focusing on her independence ‘obsession’ at the expense of the cost of living crisis.

The White Paper, titled Wealthier, Happier, Fairer: Why Not Scotland? compares Scotland and the UK with other European nations and sets out why the SNP/Greens think the country would be better off if it were independent.

But it does not address key issues such as what currency Scotland would use, its financial state given the vast deficit, pensions, benefits, defence policy and plans to rejoin the EU. Ms Sturgeon has hinted that future documents will cover those topics.