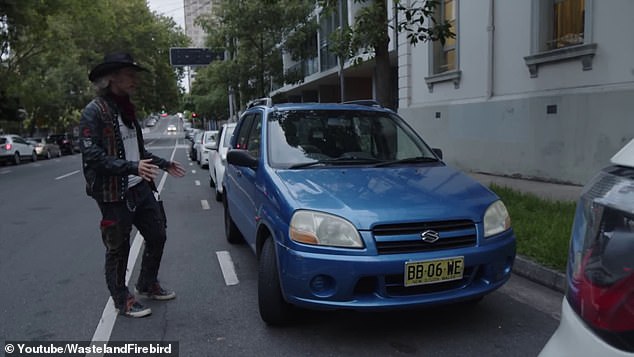 An American visiting Sydney has been blown away by ‘very regular’ cars seen everyday on Australian roads.

Self-confessed revhead Wasteland Firebird from Arizona posted a video of himself ‘freaking out’ after seeing so many strange vehicles.

But his excitement about work utes and basic model Fords, Holdens, Toyotas, Suzuki’s and Citröens was lost on most Aussies – although they appreciated his ‘enthusiasm’.

‘I’m so excited about all the cars that there are in Sydney, Australia,’ the cowboy-hat wearing American says in the video.

‘Holden Astra! The reason I am so excited about these is that we got these in the US briefly and I bet most of you don’t even know that.

‘I know this because I went to a Saturn dealer and they had the Astra. I’ve never seen one since.’

The content creator currently living Down Under on a four-year working visa also made a fuss about the wide range of imported vehicles.

Wow – a Holden Astra! The content creator said he’s only ever seen the car on one occasion in the US

‘Citröen, Peugeot, we don’t get anything French in the US,’ he said. ‘Toyota Hi-Lux. We kinda have that but it’s different.

‘Suzuki Swift! We got a couple of these in the 1990s and they were really cool, but we don’t get these anymore,’ he said.

During the video he goes on to explain that people in America think only a car with a flat bed tray – not a 4WD – is called a ute.

‘But they also call a pick-up truck here a ute as well.’

‘And what is it with the beds in Australia? The trays are all different. In the US it would all just come with the truck, but here they have this aftermarket thing.’

Firebird revealed he’s still coming to terms with driving on the left hand side of the road after spending his entire adult life motoring on the right.

‘That’s because when I say make a left, I mean make a turn that crosses the traffic.’

He also took aim at Australia’s strict rules around speeding and modifying cars.

‘You really can’t modify your cars here,’ he said. ‘There are so many laws against modifying your cars and you can’t speed.’

‘In the US people just go at whatever speed they want to go at and what is the worst thing that will happen, you’ll get a ticket? Here they crush your car if you speed.’

While no Australian state is permitted to turn a driver’s car into a cube for going over the speed limit, New South Wales police do have the power to impound vehicle for three months if you’re car caught street racing or driving 45km/h above the limit.

Modifying cars is permitted but strict rules do apply.

‘Not surprised he’s fascinated by cars considering he arrived on horseback with a Smith & Wesson in his britches…’ one person joked.

Another wrote: ‘Really love that you’re excited for all the cars, not just the ‘cool’ ones, absolutely infectious enthusiasm.’

A third said: ‘A big V8 or a Suzuki. It doesn’t matter what it is. A genuine motoring enthusiast. This is such an awesome video.’