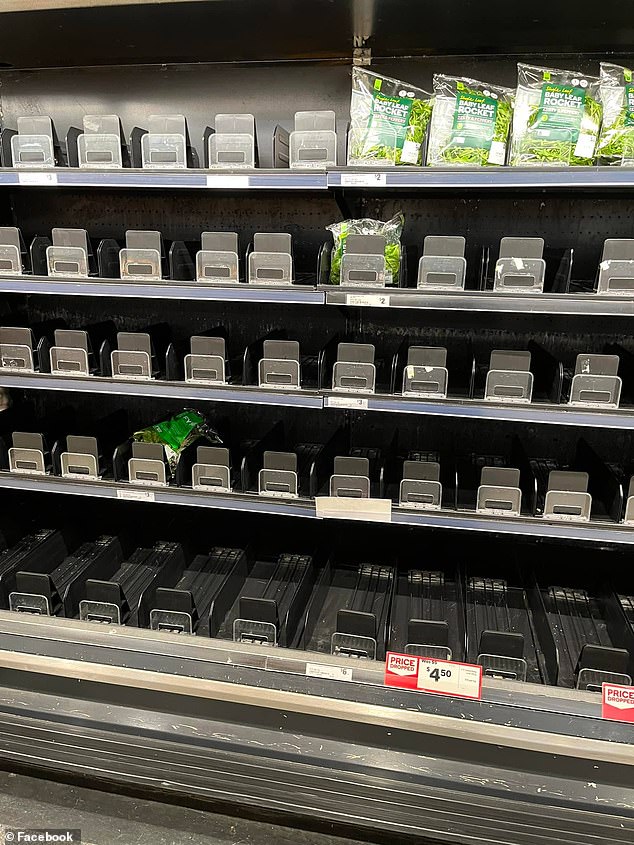 Many Aussies are abandoning lettuce to avoid paying exorbitant prices for the leafy vegetable after floods meant the price skyrocketed – but now even the humble cabbage is expensive, fetching up to $9 at wholesale prices.

A number of Australia’s fast food favourites, including KFC, Subway and Oporto, were forced to tweak their menus recently due to the lettuce shortage, blending cabbage into the salad to keep their prices low.

But the price of cabbage is also on the rise now and is looking to be the next budget blow-out for healthy-eating families amid surging living costs.

At Sydney Market on Wednesday, the city’s biggest, the price for a wholesale cabbage was as high as $9.

Typically, restaurateurs expect to pay around $4.50 for a head of cabbage at the market, meaning prices have doubled in the past month.

Australians are likely to continue having to pay $12 for a lettuce as recent flooding pushes up the price of fruit and vegetables  (Pictured, a supermarket in Brisbane selling lettuce for $12 a head last month)

Coles’ online catalogue showed a full-sized, organic head of cabbage is now worth ten dollars, nearly half an hour’s work for anyone on Australia’s minimum wage.

A whole green cabbage runs at seven dollars at Woolworths.

Cos lettuce has nearly doubled in price from the beginning of January, with the cost of other greens like baby cucumbers and cherry tomatoes also skyrocketing.

KFC notified customers earlier in the month it would use a blend of lettuce and cabbage across its restaurants, Subway also warned of changes to its menu amid the leafy comestible crisis.

Retailers and restaurants have put the price hikes down to supply chain issues off the back of flooding rains which put many parts of eastern Australia underwater, including the Lockyer Valley which was inundated twice in two months.

The region is responsible for many of Australia’s winter crops, with the fertile black soil lending itself to growing low-lying crops including beetroots, potatoes, broccolis and lettuces.

‘In normal times fruit and vegetable prices tend to recover relatively quickly and return to normal as production in other areas becomes available to fill supply gaps,’ the Australian Bureau of Agricultural and Resource Economics and Sciences said in a report.

‘However, in 2022–23 almost all aspects of the supply chain are facing inflationary pressures.’

The Lockyer Valley in south-east Queensland flooded again in May (Laidley, pictured) for the second time in just two months, causing trouble for farmers and crops in the region

AUSVEG, the lobby group for growers, said the Lockyer Valley floods, and high petrol and fertiliser prices meant consumers would continue paying more for fresh food for much of 2022 as other farming regions struggled to keep up with demand.

‘It might take some weeks and months for supply to resume to levels that we would normally see for this time of year,’ spokesman Shaun Lindhe told Daily Mail Australia.

‘When you compound that with supply issues from the Queensland floods, you see the results of it at the supermarket.’

‘The floods have impacted supply, there might be some shortages not just in Queensland but throughout the country, we’re seeing that at the moment.

‘Lockyer Valley is a major winter-growing region, a lot of supply from this time of year comes from there.’

KFC were one of the first to announce they would be adding cabbage to their burgers, much to the distaste of some consumers

Woolworths predicted stock levels won’t be back to normal for some time either.

‘We’re still seeing challenges with lettuce and berry supply so while the new crops have been planted, it will take a few weeks for stocks to return to more stable levels,’ it said in a statement.

Fast-food chains have been divided on the cabbage question, with Subway making an official announcement they would be mixing cheaper cabbages with lettuce in response to the price hikes in step with KFC.

Sydney-based burger joint Chargrill Charlie’s also responded by announcing it would not be mixing cabbage in to their chicken burgers.

McDonald’s hasn’t yet made the change to their burgers either.

Red Rooster and Oporto also switched their recipes to include a lettuce and cabbage blend.

WHY ARE VEGETABLES SO EXPENSIVE RIGHT NOW?

Supermarket giants and wholesale food retailers have put the current prices and shortages of leafy greens down to a number of factors.

The heavy rains in Queensland and New South Wales earlier in the year have been responsible for debilitating Australia’s domestic lettuce growing and harvesting, reducing the local supply of the products.

Cabbages and lettuces are both highly perishable vegetables and cannot be stored for very long even in ideal storage conditions.

Fuel costs have increased across the globe on the back of the war in Ukraine and political instability, heavily affecting transport costs within food supply chains in Australia.