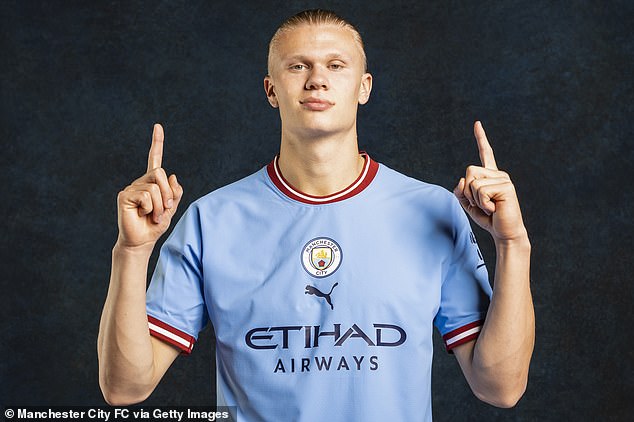 Erling Haaland’s goal tally at 21 years old is UNMATCHED by the world’s best, as Manchester City’s £51m superstar recruit has a better goals per game ratio than Lionel Messi, Cristiano Ronaldo and Sergio Aguero did at the same age

Everyone knows how good new Manchester City recruit Erling Haaland is, but the Norwegian’s goals per game ratio shows just how remarkable his talent is at 21 years old.

Joining the Premier League champions, his father Alfe-Inge’s former club, is the next step in Haaland’s career so far which has seen him score goals for fun everywhere he has been.

He made his professional debut at the age of 15 for hometown club Bryne in Norway, before moving to Ole Gunnar Solskjaer’s Molde side. A switch to Austrian outfit Red Bull Salzburg arrived in 2018 and then Dortmund signed him two and a half years ago.

Research from SBK shows that those numbers are unmatched by some of best players of the modern era at the same age.

The Norwegian will hope to emulate Sergio Aguero’s heroics at the Etihad Stadium, but even the City legend had a goals per game ratio of just 0.4 (93 in 235) at 21.