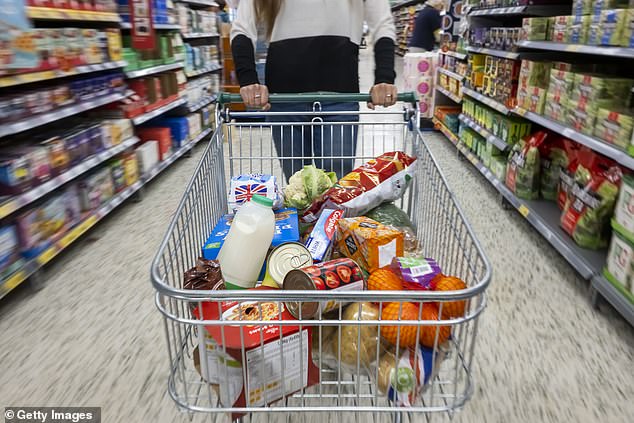 Food prices could surge 15 per cent over the summer and leave more shoppers skipping meals due to ‘food stress’, according to grocery experts.

Households are set to pay more for essentials including dairy, bread and meat as recent inflation looks set to grow further, The Institute of Grocery Distribution warns.

Amid rising inflation and a decline in real wages, a family of four may be forced to increase their spend on food and groceries from £396 per month to around £439 a month, the IGD said.

Surging prices: Food prices could surge by 15 per cent over the summer, experts warn

The group warned that some families may be forced to skip meals as inflation continues to rise.

James Walton, chief economist at IGD, said: ‘From our research, we are unlikely to see the cost of living pressures easing soon.

‘This will undoubtedly leave many households, and the businesses serving them, looking to the future with considerable anxiety.’

He adds: ‘We are already seeing households skipping meals, a clear indictor of food stress.

‘We expect the mood of shoppers to remain bleak for the foreseeable future as they are impacted by rising inflation and a decline in real wages.

‘Shoppers are likely to dial up money-saving tactics as far as possible.’

IGD said factors including uncontrolled increases in labour costs, trade disruptions caused by Brexit and the weakening of the pound against other currencies could be behind the rising grocery inflation rate.

The report said the UK economy was also facing its ‘strongest period’ of inflationary pressure since the 1970s, with the conflict in Ukraine worsening the impact by restricting supply chains and pushing up grain prices.

This has been compounded by the fact that Ukraine and Russia are both big global grain producers, collectively accounting for nearly a third of global wheat exports.

Products that use grain such as bread and products containing meat from animals fed on grain, for example chicken, are to increase in price over summer and autumn as a result, the IGD said.

Last month, the Office for National Statistics recorded that inflation hit a 40-year-high at 9 per cent, as food price rises gathered pace.

Amid rising inflation, the Bank of England has increased interest rates to 1.25 per cent today. Inflation is now expected to hit around 11 per cent later this year.

Sue Davies, Which? head of food policy and consumer rights, said: ‘With so many families already struggling to make ends meet during an unrelenting cost of living crisis, it’s hugely concerning that food prices could rise significantly over the summer.

‘Recent Which? research found that the price of hundreds of everyday groceries had soared by over 20 per cent over the last two years and that own-brand budget groceries have become less available.

‘Which? is calling for supermarkets and manufacturers to be more up-front about costs and provide really clear unit pricing so people can easily compare items.

‘Budget ranges should also be more widely available across stores so consumers do not have to pay over the odds for everyday essentials.’