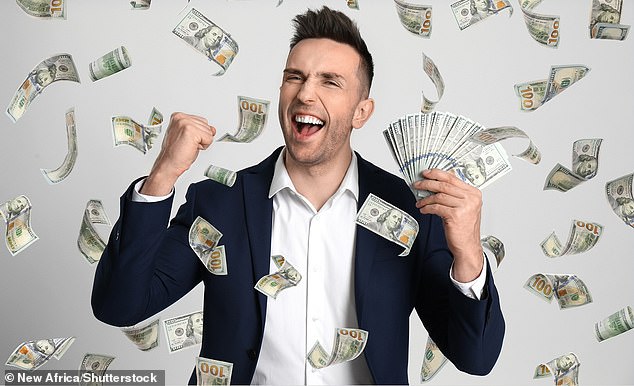 If an unlimited amount of money sounds appealing to you, a new study suggests you may be in the minority.

Researchers have surveyed more than 7,000 people living in countries around the world, including the UK, the US, China, France, India and Australia.

They found that the majority of people don’t want any more than £8.2 million ($10 million) to live an ‘absolutely ideal life’.

Results suggest ‘unlimited wants’ – an economic principle that people want an unlimited amount of money and possessions – is untrue.

Elon Musk, CEO of Tesla and SpaceX, is currently the world’s richest person, with a net worth of $216 billion (£176 billion).

But most people would ideally like far less than this over a lifetime, possibly because they think that such a colossal amount is too greedy.

Most people don’t want to be billionaires and consider £8 million the ideal amount of money for an ‘absolutely ideal life’, the study shows (file photo)

‘Unlimited wants’ is an economic principle that people want an unlimited amount of money, possessions and services.

The long-held economic belief that people have unlimited wants has permeated economic thinking and government policies and has shaped much of modern society, including advertising and consumerism.

Following a global study, researchers claim that unlimited wants is not as widespread as previously thought.

The new study was led by psychologists at the universities of Bath, Bath Spa and Exeter and published in Nature Sustainability.

‘The ideology of unlimited wants, when portrayed as human nature, can create social pressure for people to buy more than they actually want,’ said study author Dr Paul Bain at the University of Bath.

‘Discovering that most people’s ideal lives are actually quite moderate could make it socially easier for people to behave in ways that are more aligned with what makes them genuinely happy and to support stronger policies to help safeguard the planet.’

For the study, the team surveyed 7.860 people across 33 countries spanning six continents to see how much money they wanted to achieve an absolutely ideal life.

In 86 per cent of countries, the majority of people thought they would achieve their absolutely ideal lives with $10 million or less, and in some countries as little as $1 million (£830,000) or less.

These mounts represent a person’s ideal wealth across their whole lifetime, so they are relatively moderate even though they sound a lot, according to the team.

A ‘substantial’ minority (between 8 per cent and 39 per cent depending on country) wanted as much money as they could obtain.

The wealth of Elon Musk, the world’s single richest person at over $200 billion, is enough for more than 200,000 people to achieve their absolutely ideal lives.

Elon Musk (pictured) is currently the world’s richest person, with a net worth of $216 billion (£176 billion)

The researchers point out in their paper that ‘some people may have reported more limited wants to avoid being seen as greedy’.

Generally, people with unlimited wants tended to be younger and city-dwellers, who placed more value on success, power, and independence.

Unlimited wants were also more common in countries with greater acceptance of inequality and in countries that are more collectivistic, focused more on group than individual responsibilities and outcomes.

An example of a collectivistic society is Indonesia, which had the most people with unlimited wants, while the more individualistic and equality-concerned UK had fewer.

Participants were asked how much money they’d like to live an ideal life. Graph shows mean results for individual countries

However, there were anomalies like China, where few people had unlimited wants despite high cultural collectivism and acceptance of inequality.

With their study, the researchers claim to challenge the idea that unlimited wants are simply human nature, which could have important implications for the planet.

‘The findings are a stark reminder that the majority view is not necessarily reflected in policies that allow the accumulation of excessive amounts of wealth by a small number of individuals,’ said co-author Dr Renata Bongiorno at the University of Exeter and also Bath Spa University.

‘If most people are striving for wealth that is limited, policies that support people’s more limited wants, such as a wealth tax to fund sustainability initiatives, might be more popular than is often portrayed.’

MONEY CAN BUY YOU HAPPINESS: PEOPLE’S WELLBEING CONTINUES TO IMPROVE THE WEALTHIER THEY BECOME, STUDY SAYS

Money really can buy you happiness, no matter how rich you get, a 2021 study from University of Pennsylvania experts found.

It has long been thought that wealth improves people’s lives up to a certain point, but then stops making a difference.

Previous research suggested the point at which money no longer led to more happiness was around $75,000 (£55,400) a year.

However, the University of Pennsylvania study found feelings of wellbeing continue to rise with increasing income, and that there is no limit to the effect.