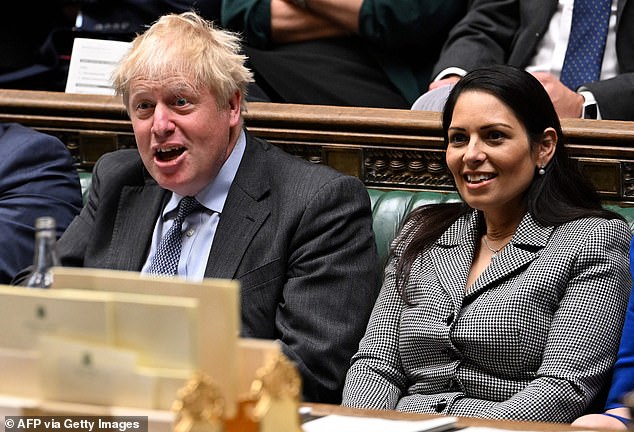 Ministers have turned their ire on the United Nations over the failure of a plane carrying deportees to Rwanda to take off due to a European court.

Priti Patel, the Home Secretary, is said to be examining Britain’s funding for the United Nations High Commissioner for Refugees in the wake of Tuesday’s embarrassment.

Its opposition was cited by the European Court of Human Rights in its eleventh-hour intervention that grounded the aircraft at the MOD’s Boscombe Down base.

The UNHCR has said Rwanda, whose own human rights record is under scrutiny, does not have the capacity to process the claims, and there is a risk some migrants could be returned to countries from which they had fled.

Before the flight took off, High Commissioner For Refugees Filippo Grandi told reporters: ‘We believe that this is all wrong…for so many different reasons.

‘The precedent that this creates is catastrophic for a concept that needs to be shared like asylum.’

Regarding funding, a Whitehall source told the Times: ‘We’re looking into it. It’s a lot of money to give an organisation that spends so much time trying to undo our policies. They must have spent a fortune on lawyers for the role it has played in the courts over the last few days.’

It came as Justice Secretary and Deputy Prime Minister Dominic Raab said the ECHR should not have intervened to over-rule UK court decisions.

Priti Patel, the Home Secretary, is said to be examining Britain’s funding for the United Nations High Commissioner for Refugees in the wake of Tuesday’s embarrassment.

Its opposition was cited by the European Court of Human Rights in its eleventh-hour intervention that grounded the aircraft at trhe MOD’s Boscombe Down base.

It came as Justice Secretary and Deputy Prime Minister Dominic Raab said the ECHR should not have intervened to over-rule UK court decisions.

Before the flight took off, High Commissioner For Refugees Filippo Grandi told reporters: ‘We believe that this is all wrong…for so many different reasons.’

A further 233 were rescued from the Channel and brought ashore yesterday, official figures have revealed.

And a family of six people has been brought ashore in Dover this morning, at least the second ship to bring people into the Kent port today.

The Ministry of Defence said six boats were intercepted in the Channel on Wednesday, with at least two Border Force boats bringing approximately 150 people ashore, including around 30 children.

However, Border Force and RNLI ship activity suggests some people may have been taken ashore further alogn the south coast in Dungeness or Ramsgate.

The majority of people brought ashore in Dover on Wednesday were men aged from their late teens to their 30s or 40s but there was also a number of women and young children.

Two boats used to attempt the crossing were brought into Dover Harbour, both appearing in poor condition and partially deflated.

One of the boats contained two children’s inflatable rubber rings as well as lifejackets.

People carried their belongings in bin bags to shore, although some had suitcases which were brought by officers.

The countries of origin of the people coming ashore in Dover included Afghanistan, Iraq and Egypt.

The row has led to calls from some Tory MPs to pull out of the European Convention on Human Rights (ECHR), the document interpreted by the court in Strasbourg – something which No 10 and Attorney General Suella Braverman have not ruled out, although it appears unlikely the Government would want to take such a drastic step.

Ministers have been told future flights may be delayed for up to a year amid interventions by the European Court of Human Rights.

The court could use temporary injunctions to roadblock the flights for several months to come.

The Justice Secretary said the UK would stay within the convention but new laws could ensure that interim measures from the Strasbourg court could effectively be ignored by the Government.

He told Times Radio: ‘In relation to the latest intervention from Strasbourg, so-called Rule 39 interim orders, which are not grounded in the European Convention, they’re based on the rules and procedure, internal rules of the court.

‘I certainly believe they should not have a legally binding effect under UK law.’

The Government plans to replace the Human Rights Act, which enshrines the ECHR in domestic law, with a new Bill of Rights. Mr Raab said the decision strengthened the case for reform of human rights laws.

Asked if the UK could simply ignore the European court’s ruling, Mr Raab said: ‘Not under the Human Rights Act, but we will address this squarely with the Bill of Rights.’

He told BBC Radio 4’s Today: ‘We are going to stay within the convention but make sure the procedural framework is reformed.’

The Government will ‘curtail’ the ability of foreign offenders to claim a right to family life as a reason for being refused deportation and ‘we will stop and change the ability of the Strasbourg court to issue what amounts to effective injunction when they have no power, grounded in the European Convention, to do so’.

Last night government lawyers were examining whether some migrants – such as those who do not claim to have suffered ill-treatment in their home countries – would not be covered by the ECHR injunction’s terms and could still be put on a plane to Kigali.

In an apparent reference to the campaign groups and human rights lawyers who have brought repeated legal actions, Miss Patel told MPs that ‘the usual suspects’ had set out to ‘thwart’ her plan.

A family of six people has been brought ashore in Dover this morning, at least the second ship to bring people into the Kent port today.

Defending the contrast between the Rwanda plan and the visa scheme welcoming Ukrainians, Mr Raab said refugees from Afghanistan and Syria need to be vetted in a different way from those from Ukraine because of a ‘history and track record of terrorism’ in the Middle Eastern countries.

Asked on ITV’s Good Morning Britain whether Afghan and Syrian refugees are a greater risk to the UK than Ukrainians, the Deputy Prime Minister and Justice Secretary said: ‘Well, look, if you look at the history and track record of terrorism across these areas, clearly in Afghanistan we’ve got al-Qaida and all of the Taliban challenges that we’ve seen over many years.

‘If you look at Islamic State, Daesh in Syria, of course there’s a specific set of security situations which are different.

‘Even in relation to Ukraine with the number of mercenaries flowing into Ukraine, we also need to be careful there.

‘But the types and the way you conduct those (security) checks will differ.’