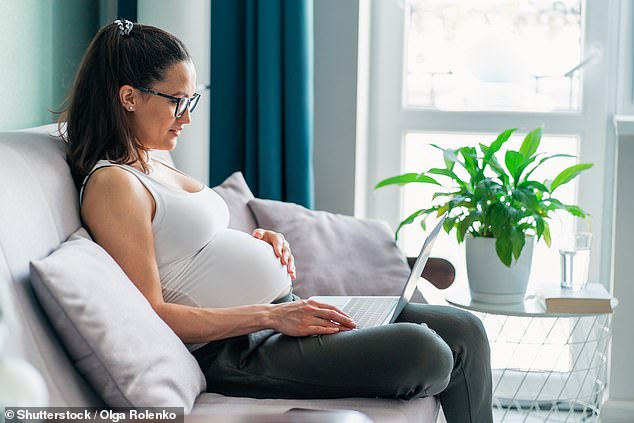 It takes women more than two years to financially recover after maternity leave and take out loans to make up for the loss in earnings over the period, a new report shows.

Around one in four women go into debt, taking out loans of £2,800 to cover their maternity leave.

Meanwhile 23 per cent are convinced they’ll never return to the financial position they were in prior to giving birth.

Women are going into debt to cover their maternity leave as the cost of living crisis puts additional pressure on new parents.

The cost of living crisis is undoubtedly having an impact on the borrowing levels of new parents.

The study, conducted by Credit Karma, finds loans are being used to pay for essentials like groceries (42 per cent), bills (32 per cent), as well as baby clothes and supplies (26 per cent).

On average women are now taking out £560 more in debt than they were four years ago when a similar study was conducted.

Akansha Nath, head of partnerships at Credit Karma UK said: ‘Women are often disadvantaged financially throughout their life, and the responsibility to give birth plays a huge role in this gender disparity.

‘At a time when the cost of living is affecting most people, and every penny counts, it’s more important than ever that women take advantage of any support available to them.’

Financial difficulties resulting from maternity leave are also often compounded by interest accruing on student loans while they are unable to work.

A new mother accrues an average of £1,770 loan interest in just six months of leave if they have a student loan.

Stuart Walton, financial planner at Charles Stanley, said: ‘I am not surprised by it [the rise in maternity debt], especially with current cost of living.

‘Essential living costs have increased over the past year or so.’

Parents-to-be should start planning as early as possible to make sure they have financial security when starting or growing their family.

Annabelle Williams, personal finance specialist at Nutmeg and author of Why Women Are Poorer Than Men And What We Can Do About It, agrees pointing out that the two years of the pandemic were worse financially for women than they were for men, with the majority of those on furlough being women.

In the UK, employees can legally take up to 52 weeks maternity leave and can be paid for up to 39 weeks.

In addition, two thirds of UK organisations offer enhanced maternity pay if employees have been at the company for a minimum amount of time, according to the charity Pregnant Then Screwed.

These policies offer more money than statuary rates and are worth looking into.

The importance of planning

Walton says that in the best case scenario people should start financial planning for a baby ‘as early as possible’, but planning while pregnant is ‘essential’ if they don’t have a chance before.

He suggests parents-to-be break down their expenditure into basic essentials such as bills groceries, basic quality of life expenditure including clothes and phone bills, and non-essential such as holidays and entertainment.

Nath suggests some tips for those looking to sure up their finances before going on maternity leave including moving your money to make sure you are making the most of deals available of banking and saving offers, as well as consolidating debts, and checking your credit score if you think you will need to borrow during the leave.

When planning ahead Walton says it is a good idea to speak to friends and family to find out how they managed their finances when they had a baby, and if there was anything they wish they had known before hand or done differently.

In addition he advises people to build an emergency fund of cash for unplanned spending with enough to cover three to six months of expenditure if possible.

They should also speak to their employers about what support and benefits are available for new families, alongside government schemes such as national insurance credits.

Childcare costs have risen by £2,000 a year over the past decade according to the Trades Union Congress.

Childcare and returning to work

Even after maternity leave, 44 per cent of women say they are working less hours than they like because it does not make sense financially to work longer with the costs of childcare.

On Monday it was revealed that the costs of childcare have risen by more than £2,000 in a decade as figures from the Trades Union Congress show that childcare costs for children under two have increased by £185 a month since 2010.

According to the OCED, the UK has the second highest childcare costs amongst developed countries.

Williams advises parents not to rule any childcare options out before they have fully crunched the numbers for the hours they need support.

Help is available in form of up to 30 hours free childcare, but this only usually kicks in after a child turns three.

There is also the option of tax-free childcare in which an online account can be set up in conjunction with the 30 hours above.

For every £8 paid into this account, the Government will pay in £2 to use to pay the childcare provider.