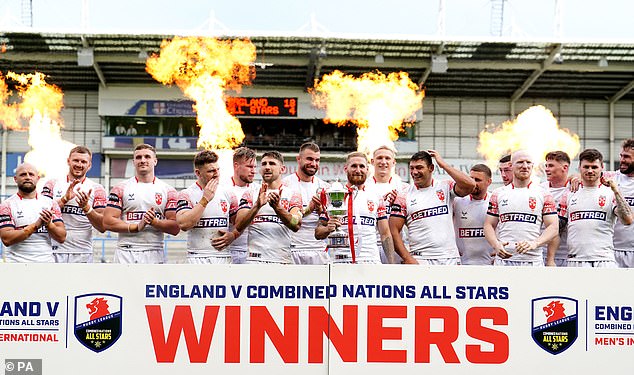 By Ross Heppenstall For The Mail On Sunday

Shaun Wane delivered a stark World Cup warning to his England players after they warmed up for this year’s rearranged tournament in winning fashion.

Wane’s England face Samoa in their World Cup opener at Newcastle’s St James’ Park on October 15 and this mid-season international was designed to give them a serious work-out.

The Combined Nations All Stars side was made up of the kind of physically imposing overseas players England will face in teams like Samoa at the World Cup.

England had enough class to avenge last year’s defeat to the All Stars in Wane’s first game in charge on this ground.

Debutant centre Jake Wardle opened the scoring and George Williams added a second try to make it 12-0 at the break following an outstanding break and pass from John Bateman, who claimed a third shortly after the interval.

Bateman, deployed at loose forward, is a player Wane knows as well as anyone from their title-winning days together at Wigan Warriors. Despite Bateman’s man-of-the-match display, Wane insisted the Yorkshireman was not guaranteed a place in his side heading into the World Cup.

He also queried the performance of St Helens rookie Jack Welsby on his debut — and claimed his trusty captain Sam Tomkins can similarly improve.

Wane said: ‘We did some really good things — and some things we need to get better — but it was more good than bad. I thought George was good, but Jack can play better than he did and I just want more from him.’

On Bateman, Wane said: ‘There were a couple of defensive errors early on in the game and he got a message from me and he fixed it pretty quick.

‘Overall he looked good, but I honestly, genuinely think he can do lot better.

‘I’d say three or four players, if they are playing well, are nailed on to play against Samoa but I’m not sure John’s one of them.

‘The door is open and I would say there are more than 10 starting spots up for grabs. Sam did some good things and some ordinary things and he would be nailed on for the full-back spot – but if his form dipped he would be out.’ The All Stars claimed a consolation through Ken Sio. Coach Ellery Hanley said of England’s World Cup prospects: ‘There are some areas where England are vulnerable.

‘You can’t paper over the cracks, but it’s not for me to point out the areas what Shaun should and shouldn’t do. I’ll see things differently to him.’