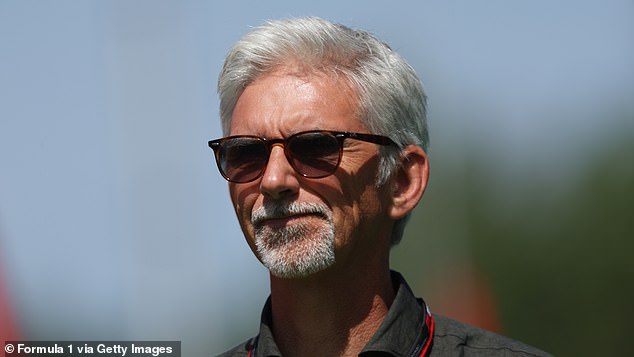 Damon Hill believes Lewis Hamilton still has what it takes to crown a glittering career with an eighth world title.

That is despite time seemingly running out for the Mercedes star — he is 37, is driving what his boss Toto Wolff called a ‘s***box’ and has only next year left on his contract. If he sees it out, that is.

But Hill, who won the world championship having just turned 36 in 1996, detects no diminution of ability in Hamilton when he looks behind the statistics of a disappointing campaign that leaves the Briton trailing his new team-mate George Russell by 37 points and championship leader Max Verstappen by 88 going into tomorrow’s Canadian Grand Prix.

‘Lewis can win an eighth world title,’ Hill told The Mail on Sunday prior to a slithering and slippery third practice session at Circuit Gilles Villeneuve on Saturday.

‘Fatigue can be a problem as drivers get older. You pack up and move from one country to another and do routine things such as media, sponsor events — if you find all that a chore, it can grind you down. It will make you perform badly. I don’t see that with Lewis. He doesn’t seem to be fatigued to me. So he can go on as long as he wants.

‘He took a massive blow in Abu Dhabi last year, losing to Max (Verstappen) in the final race. Anyone can understand how hard it must have been psychologically to get so close to an eighth title and then to be denied it through what we might call a clerical error.

‘But he is doing fine. He is probably looking out of the corner of his eye and seeing Fernando (Alonso) still going strong at nearly 41. Fernando can still give some of the younger guys a run for their money.

‘Yes, George has beaten Lewis in qualifying more often than not, but there are extenuating circumstances because Lewis has been doing the donkey work. George is not experienced enough to carry out the experimental stuff on the car, so that has been left to Lewis.

‘He has matured and is now happy to accept he has a younger kid who is keen and quick. But, if it came down to a championship battle, George is unproven.

‘Lewis has had reason to have a whinge but he hasn’t, other than having a go at his engineers on the radio. He could have got down in the dumps but he has been stoic.’

Hamilton’s biggest problem, as Hill acknowledges, is the car. It is slow relative to the Red Bulls and Ferraris. And it bounces. And has so far proved beyond remedy. Verstappen, meanwhile, has found the stride of his life.

Not that it is all going well at Ferrari, either. Charles Leclerc, Verstappen’s most realistic rival, will start the 70-lap grand prix next to the 1976 Olympic rowing lake at the back of the grid after changing his engine. This is the latest setback for the Monegasque, who has suffered two failures in the last three races to fall 37 points off the summit — a swing to Verstappen of 80 points in five rounds.

Mercedes have won wight consecutive Constructors’ Championships between 2014 and 2020

But back to the ‘porpoising’ Mercedes. Even the FIA technical directive issued last week in an attempt to prevent the bouncing phenomenon is of little help to the world champion team: they would lose pace if they raise the car’s ride height in search of a smoother trip.

Hill adds: ‘Usually someone finds a solution to any given problem towards the middle or end of the season and that sets the trajectory for the following year. That is what Lewis must hope. What will happen if that isn’t the case, I don’t know.’

Yes, the clock is ticking and no matter how deep Hamilton’s trench of resilience, and regardless of how compelling the example of Alonso’s longevity is, there will come a time in the course of the next few seasons when Hamilton will retire.

‘It may not be this year or next year, but the moment will come before very long,’ said Hill. ‘It is hard to judge when that should be. You have to put retirement out of your mind, though, and hope you have the sudden realisation that this is the perfect juncture to stop. You don’t want to be counting down the days.

‘Bernie Ecclestone, that insightful observer of the human condition, says as soon as a driver sees the red light, he should stop immediately. It’s green or red. You are in or out.’

It has been noticeable this season how many times Wolff has got straight on the radio to Hamilton post-qualifying or post-race to offer apologies to him for the poor equipment he has been handed. Russell is not fed the same syrup.

‘Getting gooey over the new boy could be destabilising,’ adds Hill. ‘It might make it look as if they had already moved on to a new love affair. Toto is making it clear that they value Lewis’s contribution to the team as much as ever.’