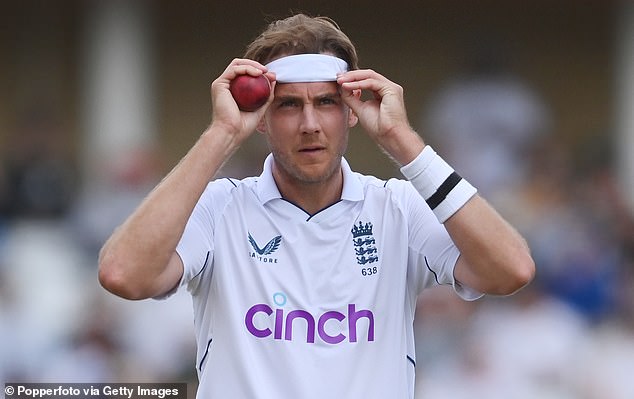 Stuart Broad has warned supporters that the exhilarating gamble in a Trent Bridge win he ranks as highly as any in his career will become the rule rather than the exception of England’s developing Test strategy.

‘We are going to risk defeat because, even if we had lost, it’s still more inspiring than blocking out for a draw or never having a scent of victory,’ Broad said.

‘We believe we will win more than we lose playing this style and that we can win games from any position. Only when you start doubting yourself do you tend to mess things up.

‘Of course, there are going to be times we say a positive option is to get a draw because a win is not within our reach.

‘Earlier this year, in Sydney, was an example of a positive draw. We batted the full day and saw the game out nine wickets down. Saving games is still relevant. There was no point slogging a ball up in the air in the last over of that Test.’

Against New Zealand at Trent Bridge, though, infected by coach Brendon McCullum’s positivity pandemic, England never blinked in their pursuit of a 299-run target. Even at 93 for four on Tuesday.

‘We needed 160 runs at tea and in that scenario, even if you can get it to eight wickets down needing 80, you can still do it. Eight wickets down, needing 350, you can’t,’ Broad continued. ‘Anything achievable, we will hunt and go for now because this week proved that the talent is there in the team to go and do it.’

The exuberance in Broad’s voice belies the fact he turns 36 this week. The clarity in it, a contrast to last winter when his axing from a side on a losing streak raised the question whether his international days were behind him.

Two games into a new era, however, he is left reflecting on one of the most remarkable Tests in history — one which contained 24 sixes, the most in a match in England, and saw Ben Stokes’s side score their runs at 4.7 runs per over throughout.

‘This was right up there in terms of results in my Test career because of the style of the win, it being my home ground and a full house on the last day,’ Broad said.

‘Then, consider the position we were in, conceding 553 in the first innings. To take 20 wickets on a pitch like that also deserves a lot of credit.

‘The Headingley Ashes Test of 2019 for the drama, the feeling sick and nervous. That was outrageously good. A victory from the jaws of defeat. Whereas this one was claimed of our own making.’

Broad’s contribution to it is also worth reflecting upon. Accused of being stuck in his ways during pockets of his 154-cap career, bowling dry as staple, the old dog has incorporated new tricks into his routine.

‘Everyone has been given confidence to play their own way and as long as that way is moving the game forward, you are going to be backed,’ Broad explained.

‘It’s freed me up because I’m not thinking if I get one for 100, I’ve failed. It’s more about changing the momentum of the game rather than the old school of putting numbers on the board.

‘As a seam bowler there was no seam movement and the stumps weren’t in play because of the bounce. So, what was my biggest threat? In certain spells it was using that bounce with shorter-pitched bowling.

‘I’ve taken away that pressure of trying to be the same, consistent bowler all the time, bowling at the top of off stump for the whole match. I wouldn’t have been as threatening as I was running in and trying different things.’

Broad took five of England’s 20 wickets in a game that included hundreds from Ollie Pope and Joe Root and Jonny Bairstow’s magnum opus 136 off 92 balls.

‘Jonny’s probably going to thrive as much as anyone because of our style of play,’ Broad said. ‘He’s got the talent, he’s got the aggression and power. The see-ball, hit-ball approach, without the worry of being judged if he gets out is perfect for him.

‘It was a brutal innings. He’d have been proud of that in a one-day international but to do it with fielders on the boundary and in a pressure scenario, is testament to him.

‘When you pick an XI, you pick a style of players for different scenarios. You are not necessarily picking Jonny Bairstow to score you tough runs when it’s nipping around or survive for a period of time. He is in the team to take the game to the opposition.

‘I couldn’t believe the consistency of his ball striking or the fact he didn’t make a mistake. It all happened so quickly. The runs required kept diminishing at such a rate.

‘He’s been in and out of the team quite a bit and maybe that’s because people have struggled to know what his best role is in Test cricket. We know he won’t be able to play like that every day but if he keeps that mindset, he will be very dangerous.

‘In England, we get a bit obsessed with averages and stats and consistency, yet the biggest strength of the one-day team since 2015 has been to get rid of the players who had solid averages at OK strike rates and bring players in who could have big impacts.

‘Yes, they might struggle for a spell but then when you want them to deliver, they do. It’s about carrying that mentality into the Test match team now.’