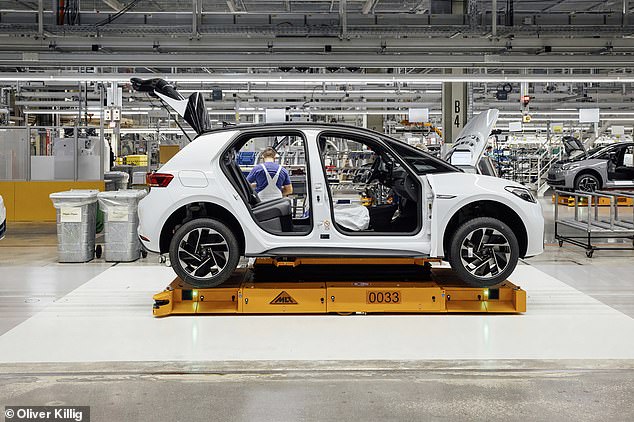 Volkswagen will become the biggest electric car brand in the next two years when sales overtake Tesla from 2024, industry report predicts

Tesla will hold onto its global electric vehicle sales crown for another 18 months before being overtaken at the top of the charts by German automotive giant Volkswagen, according to a new industry report.

Profit incentives to catch up with Elon Musk’s car company is lacking for most traditional car manufacturers in the short term amid rising battery costs and a lack of scale, though Volkswagen is the exception to this, says Bloomberg Intelligence.

It says the Wolfsburg-based brand is on track to overtake Tesla’s electric car volume in 2024 with global demand for battery-powered cars set to more than double out to 2025.

Volkswagen to become global EV sales leader by 2024: A new report has predicted that Tesla will be toppled from the top of the electric car charts in around 18 months

Bloomberg Intelligence’s analysis shows China’s BYD is on course to rank third for EV sales globally in 2025 followed by a glut of ‘legacy automakers’.

It predicts that only by the end of the 2020s that US and Japanese automakers will be serious challengers for a top three spot in the EV sales charts.

In a bid to challenge Tesla’s $686billion market cap – which is almost double that of all US and EU car brands combined – the report highlights that mainstream vehicle manufacturers are unlikely to succeed in divesting EV-related assets that are intertwined with their combustion operations and whose cash flows are paying for the transition.

Volkswagen is the exception, with the automotive giant currently assessing the feasibility of a potential IPO of its Porsche brand to unlock value from the luxury car maker.

Given the company’s potential 30 per cent electric car sales mix in 2023 and about 45 per cent in 2025, it is significantly ahead of peers and could attract a luxury based €85billion valuation for the IPO and, possibly, an even higher tech-oriented valuation, according to the report.

Production of its eagerly-anticipated ID. Buzz (and the ID. Buzz Cargo van) recently started at its Hanover plant, with first vehicles due to be delivered to customers in the autumn.

While VW is predicted to overtake Tesla for global electric car sales from 2024, other major manufactures – including Mercedes, Ford and Toyota – will lag behind Elon Musk’s brand

‘Looking ahead, automakers in Europe, China and elsewhere will continue to challenge Tesla via an impending wave of new models, though profit incentives are limited amid rising battery costs and a lack of scale,’ explains Michael Dean, senior European automotive industry analyst at Bloomberg Intelligence.

‘That may change in 2025-2026 as more brands achieve critical mass on new-generation models with proprietary software.

Battery prices remain critical to the cost competitiveness of BEVs and Volkswagen is investing up to €30billion in the supply chain, including the opening of six new battery-cell plants in Europe by 2030.

Production of VW’s eagerly-anticipated ID. Buzz recently started at its Hanover plant, with first vehicles due to be delivered to customers in the autumn

China will become one of the major electric car markets in the next three years, with a quarter of all passenger vehicle registrations by 2025 set to be fully-electric.

Volkswagen, BMW and other foreign brands’ sales in China may come at the expense of pricing and profitability, having ceded first-mover advantage to Tesla and local makers.

BYD, Nio, Xpeng and other local firms are rapidly closing the technology and branding gaps, wooing consumers not only with driving range and power, but also lower prices, luxury trim and even virtual-reality entertainment.

The report says sales of Ford’s all-new electric F-150 Lightning will help to close the gap to Tesla by becoming the full-size battery-only pickup truck with Elon Musk’s brand and General Motors not set to compete in this sector before 2023 and Rivian’s small scale output of R1T trucks described as ‘unthreatening’.

Japan is said to be dropping behind with its domestic market dominated by hybrids rather than pure electric cars.