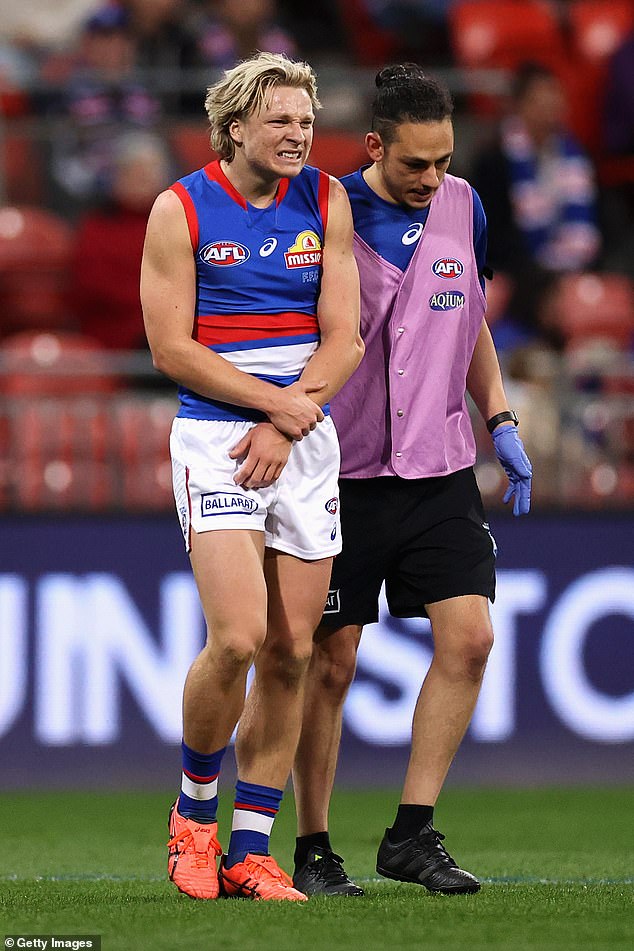 It’s simultaneously the most gruesome and bravest thing you’ve seen on an AFL field this year: Bulldogs star Cody Weightman dislocating his elbow but returning to the game to play a starring role in his side’s 20-point win over GWS on Saturday night.

Weightman kicked five first-half goals for the Bulldogs before dislocating his elbow in an innocuous collision with teammate Josh Schache.

Remarkably, the polarising small forward then had his elbow put back in on the sidelines, before trainers strapped it back up so he could return to the action.

It was an incredible display of bravery, which was lauded by incredulous commentators during the broadcast.

‘It’s a brutal game this one, isn’t it?’ Bulldogs great Luke Darcy said on Channel 7.

‘Cody Weightman, five first-half goals and then an elbow dislocation. They’ve put it back in on the ground, you think the modern players aren’t brave?’

The bubbly Weightman was in typically energetic spirits after the game, no doubt fuelled by adrenaline and a winning feeling, and said he was feeling pretty good.

‘The elbow is not too bad, I was able to keep playing, which is a bonus. It wasn’t too great at the time, but once Chris Bell [Bulldogs medico] was able to put it back in, it felt a lot better,’ he said.

‘Lucky it went back in!’

Lucky indeed. Tipping he will be feeling a bit sore now the adrenaline has worn off, though.

Bulldogs coach Luke Beveridge also praised the courage of his star forward after the game.

‘It was a nasty injury. He was brave and he came back on. It’s pretty swollen,’ he said.

‘Hopefully it settles down quickly. I’d imagine our guys will scan it and see what’s happened. Hopefully it’s not too bad, other than the trauma of dislocating it.

‘He fought the good fight in the second half, and kept the legs ticking over for us. He was pivotal to us winning the game.’

Weightman celebrates winning against the GWS Giants on Saturday night

It was a phenomenal feat of bravery from a talented forward who almost draws more attention for getting free kicks than he does for his brilliant goalkicking.

He hasn’t entirely escaped attention, however, with some viewers questioning whether the small forward used a Toby Greene-style studs-up technique to take a mark in the first term.

He has now kicked 21 goals from his 11 matches this season, with no word from the club yet as to whether he will miss any games.