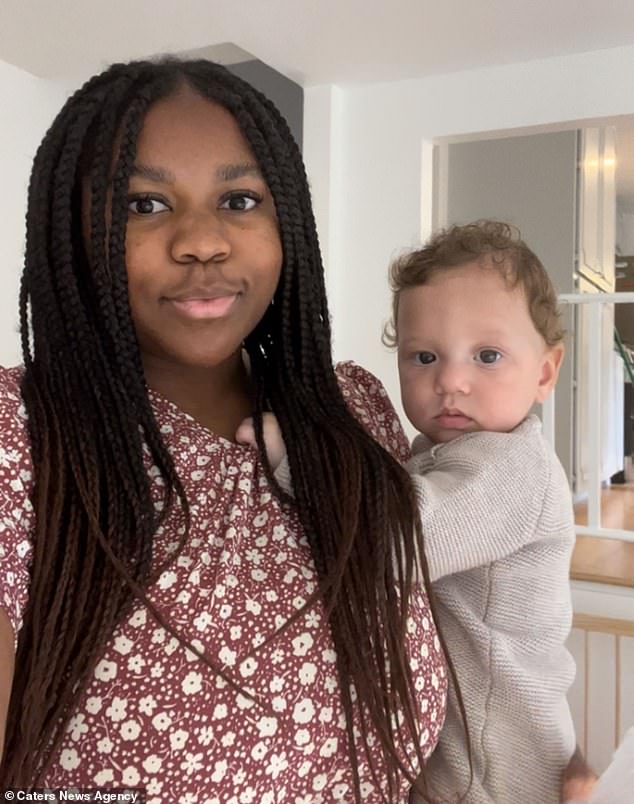 Yes, he’s my son! Black mother married to a white man says people assume she’s the babysitter because her son has lighter skin than her – and trolls ask if he was switched at birth

By Jessica Taylor For Mailonline

A black mother claims strangers think she’s her son’s babysitter because his skin is so much lighter than hers.

Heather Dalia, 28, gave birth to her son Carter, nine months ago. Since then, she says strangers question if he is really her biological son because of the color of his skin.

The mother from California, usually laughs off the comments, but thinks it raises important issues about how society perceives families should look.

She said: ‘I’ve encountered people when I’m out and about who are shocked that I’m his mother and tell me that they had “no idea”.

Heather Dalia, 28, from California, is often mistaken for her son Carter’s babysitter because his skin is much fairer than hers

Heather’s husband John, 27, (pictured on his wedding day, left and with Carter, right) has fair skin and blue eyes but she claims little Carter is even fairer than his dad

‘I’ve even had someone come to my house to fix the blinds and assume I was his babysitter.’

Heather explained her husband and Carter’s dad John, 27, has fair skin, blue eyes and straight hair. She claims Carter is even fairer than his dad, which shocks people.

‘It’s not something you see often,’ she said.

‘I have people from the black community asking me where are his black features and I have other people looking at me as if I’ve kidnapped someone’s child.’

After Heather posted photos of her son Carter on TikTok, she claims some people have sent her nasty messages asking if he was switched at birth

‘This has begun to change because his features have changed with age but it took several months for him to show enough resemblance to his mother to not be questioned.’

After sharing photos of Carter on TikTok that went viral, Heather has had to fend off several nasty comments about her family.

She said: ‘Some people try to find a way to make it controversial and we had a few negative comments from people who said, ‘”Who cares what his skin color is and are you sure he wasn’t in fact switched at birth”?.

‘I wasn’t expecting this negative response as I posted it because me and John think it’s funny how different he looked and have learned to embrace it rather than make it weird.’

She added she initially shared the video on TikTok for her friends and family, who were the only followers she had at the time.

Heather says Carter (pictured at a few weeks old) has started to look more like her as he’s got older but as a newborn, he didn’t resemble his mother at all

Heather wants to show people that babies are born with all sorts of different features and skin tones, whatever their genetic make-up.

She added: ‘You never really see it in the media but there are so many possible ways a baby can look.

‘While a few claimed this was a common thing, my experiences in public have made me feel otherwise.

‘I think if people just saw it more in the media, it would become more common and then people wouldn’t be so shocked to see a black woman with a fair-skinned child.

‘I’ll believe this is common when I no longer get stared at in public when I’m out with my son.’