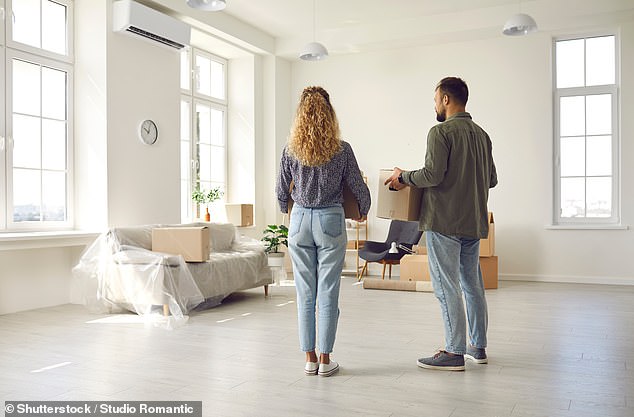 The monthly cost of owning an average home with a 10 per cent deposit mortgage is now slightly higher than renting it, despite rental inflation hitting double digits for the first time in at least a decade, according to estate agents Hamptons.

It said that working on the basis that last week’s 0.25 percentage point rise in the Bank rate was passed on fully to borrowers then the picture has shifted from it being £40 more expensive to rent to £1 cheaper.

Hamptons estate agents said average rents in Britain stand at £1,152 a month, which is a rise of 11.5 per cent in a year – or the equivalent of £119 a month higher than a year ago

Hamptons models its calculations on the monthly cost of rent vs mortgage payements for someone owning a home with a 90 per cent loan-to-value loan. It does not factor in the requirement to save a deposit to do this.

It is the first time that rental growth has reached double digits since Hamptons began started its records in 2012.

The latest figures show rental growth has surpassed the previous record rate set in April of 9.8 per cent.

With rents rising quickly and mortgage rates near historic lows, it had been cheaper to buy a home in Britain than rent for the past 11 months, but successive Bank of England rate rises since December have pushed up home loan rates, narrowing and then eradicating the gap.

It was £160 cheaper to buy than rent in November of last year, before Bank Rate started to rise from 0.1 per cent.

In May, by which point Bank Rate had reached 1 per cent, it was £40 a month cheaper to service a mortgage with a 10 per cent deposit than it was to rent the same home, according to Hamptons.

The average mortgage rate for those with a 10 per cent deposit, used by Hamptons  for its modeling was 2.86 per cent, with last week’s 0.25 percentage point rise taking it up to 3.11 per cent.

The Bank of England has repeatedly raised interest rates in recent months, pushing up the cost of borrowing among homebuyers

In reality, the cost of new fixed rate mortgages is not directly affected by the Bank of England’s rate in this way – and they will not move up directly in line with it, as Hamptons has modelled.

On top of this first-time buyers also need to save for a deposit. For many this is the main barrier to getting onto the property ladder, with house price inflation pushing the amount needing to be saved up.

Chris Hutchinson, of rental firm Canopy, said: ‘The housing market is showing a few signs of cooling but it cannot be ignored that house prices are still far too high, making homeownership a pipe dream for many, particularly first time buyers.

‘Add to this the backdrop of the cost of living crisis and it’s no wonder many can’t even begin to think about buying.’

Each 0.25 per cent rise in the Bank Rate will push the cost of buying further above the cost of renting by £41 a month for a typical first-time buyer with a 10 per cent deposit

Although it is now marginally cheaper to rent, the current situation is in sharp contrast to two years ago at the height of the pandemic when lenders raised mortgage rates for buyers with small deposits – making it considerably cheaper to be a tenant.

Although at that point, the Bank of England had cut Bank Rate to an all-time low of 0.1 per cent, lenders raised mortgage rates to reflect the higher risk of lending.

These higher mortgage costs meant that for the first time since 2014, renting was cheaper by £65 a month than buying with a 10 per cent deposit.

Mortgage rates subsequently fell substantially to reverse this scenario and make owning the average home with a 10 per cent deposit cheaper, despite property inflaiton pushing up the size of home loans needed.

For buyers with a 5 per cent deposit, it has nearly always been cheaper to rent than buy since the monthly mortgage costs are higher.

There are also regional variations to factor in. For someone with a 10 per cent deposit, it is typically cheaper to rent rather than buy in the south of the UK, while in northern areas it is generally cheaper to buy than rent.

Harriet Scanlan, of estate agents Antony Roberts, said: ‘The ongoing scramble for rental property, which is already of concern for tenants, is only likely to get worse in the foreseeable future if more people have to rent for longer as buying becomes increasingly out of reach.

‘The lack of rental stock has been a major issue for some time. With many landlords selling up in order to take advantage of a strong sales market, particularly for large family homes, rents have been rising accordingly.’

London rents are on the up

For the first time since November 2019, rents in London grew faster than any other region in the country, the research also showed.

Average rents grew 15.7 per cent in the past 12 months, faster than the 13.4 per cent recorded in the South West over the same period.

The last time London rents were growing quicker than anywhere else was during late 2019 when rents in the capital were up 6.4 per cent during the year compared to 3.9 per cent across Britain.

Inner London saw rents jump by more than a third – up 33.6 per cent – during the course of the last year, the fastest growth recorded in any region since the Hamptons Lettings Index began.

However, almost all this growth was generated by the recovery from the falls recorded during the pandemic, with Inner London rents up just 3.1 per cent between January 2020 and May 2022.

‘For the last 11 months it’s been cheaper to buy with a 10 per cent deposit than rent due to rental growth running hot and mortgage rates near record lows.

‘But the Bank of England base rate hike will change this once again, pushing the cost of buying back above renting – a reversal of pre-pandemic times when the average buyer saved nearly £800 a year by owning rather than renting.

‘For many buyers though, it isn’t just the challenge of servicing higher monthly mortgage repayments, it’s saving up for a deposit which remains the big barrier.

‘Over the next year or so we expect several further small interest rate rises, with mortgage rates set to peak around the middle of 2023 which will add to the cost of buying in cash terms.

‘We also expect rental growth to slow later in the year as rising living costs squeeze affordability. By this point it will mean that for new buyers with smaller deposits, the monthly cost of purchasing a home will be significantly higher than renting one.’