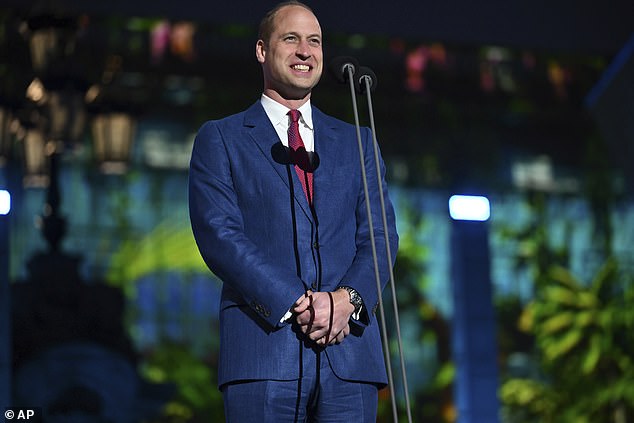 As Prince William turns 40 today, royal experts have debated whether the Duke of Cambridge is really doing anything to shake up the monarchy in the 21st century.

Appearing on Good Morning Britain on Tuesday, historian Tessa Dunlop, said ‘he is simply working out how to make the royal family relevant’, and challenged the notion that he’s a moderniser.

She said that royalty has always been involvedin philanthropy, and said there’s nothing radical in William’s approach.

It comes after William marked his birthday by appearing on the cover of The Big Issue after he spoke of his desire to end homelessness in the UK and he took to the streets of London to sell copies of the magazine.

As Prince William turns 40 today, his vision reportedly comprises to shake up and modernise the monarchy a Royal Commentator claimed in a Good Morning Britain debate

Tessa pointed out that ‘we’ve had a philanthropic monarchy for well over 100 years’ and this isn’t something new.

She said: ‘One of the ways of binding the monarch, the future King, The Prince Of Wales to the hearts and minds of the people was to do good things.’

She argued that the monarchy recognises the ‘big cause of the moment’ and focus on that.

The historian argued ‘It is traditional rather than radical’ however she agrees it is not ‘necessarily bad thing.’

Emily said she disagreed with Tessa because she believes William has already made a difference and he is already changing the way things are done by the monarchy.

She pointed out that he reacted ‘really well’ and made a ‘landmark speech’ after the colonial images from his Caribbean tour.

She went on: ‘Here is William saying, “You know what, we should be doing things differently. We are in the 21st century. Countries should be able to rule themselves and decide who they have as heads of state”.

The debate comes after William revealed he hopes to show his three children the ‘fantastic’ homelessness organisations he works with – ‘just as my mother did for me.’

The Duke of Cambridge wrote for the magazine to explain why he wanted to shine a light on the issue for his milestone, which he celebrates tomorrow, after going undercover as a Big Issue seller on the streets of London earlier this month.

He also recalled how his interest in the issue of homelessness started aged 11, when he first visited a homeless shelter with his mother, the Princess of Wales. He added that Diana, ‘in her own inimitable style, was determined to shine a light on an overlooked, misunderstood problem’.

The magazine, sold by people in order to lift themselves out of poverty, also includes an interview between William and Dave Martin, 60, the Big Issue vendor he joined to sell the magazine

The magazine, sold by people in order to lift themselves out of poverty, also includes an interview between William and Dave Martin, 60, the Big Issue vendor he joined to sell the magazine. Together that afternoon they sold 32 copies.

William, who is father to, Prince George eight, Princess Charlotte, seven, and Prince Louis, four, wrote: ‘I was 11 when I first visited a homeless shelter with my mother, who in her own inimitable style was determined to shine a light on an overlooked, misunderstood problem.

‘In the 30-odd years since, I’ve seen countless projects in this space grow from strength to strength, including charities of which I have had the honour of being Patron.

Dr Neil said William (pictured)  ‘was a key member of the team, and he worked 12 hour shifts with four men’

He continued: ‘I wanted to experience the other side and see what it was like to be a Big Issue vendor. My time was truly eye opening.

On ITV’s Lorraine on Tuesday royal reporter Jennie Bond, who followed and reported on Williams life, said his late mother Diana Princess of Wales ‘influenced his life hugely’ as she used to take him to homeless shelters as a young man.

Dr Neil said: ‘He was a key member of the team, and he worked 12 hour shifts with four men so we were all very close.’

Williams former colleague admitted: ‘He is an amazing pilot, he truly cared about the pilots, team and the patience.’

‘He was such a genuine guy, such a nice guy, after the first meeting he was just one of the pilots.’

Neil said he will be a ‘fantastic King when he gets there.’

Williams former colleague admitted that William ‘is an amazing pilot, he truly cared about the pilots, team and the patience’