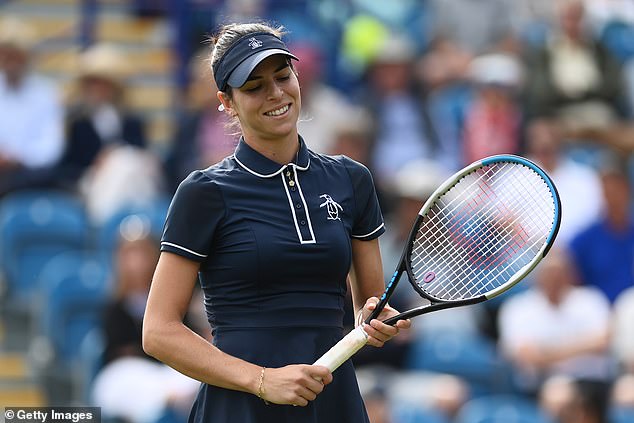 Aussie tennis star Ajla Tomljanovic has been left red-faced by the opponent she labelled ‘disgraceful’ at Wimbledon last year.

The world number 45 was beaten by defending champion Jelena Ostapenko 6-4 6-4 in the second round of the Eastbourne International, a traditional warm-up event to the grand slam tournament in London.

This time there was no bad blood on court, with the former French Open champion showcasing her class from start to finish.

Just over 12 months ago was a very different story, with Tomljanovic accusing Ostapenko of lying about being injured when she took a medical timeout late in their match at the All England Club, which the Aussie won 4-6 6-4 6-2.

With Ostapenko trailing 4-0 in the deciding third set, the Latvian, currently ranked 14 in the world, called for the trainer.

The world number 45 was beaten by defending champion Jelena Ostapenko (pictured) 6-4 6-4 in the second round at the Eastbourne International, a traditional warm up event to the grand slam tournament in London

Tomljanovic, who once dated polarising tennis star Nick Kyrgios, was seething at what she believed was a deliberate attempt to halt her momentum with the match on the line.

‘You know she’s lying, right? We all know,’ she told the chair umpire at the time.

‘Are you taking into any consideration that she looked fine?’

The pair then had a fiery exchange at the net post-match, with Ostapenko labelling the Aussie ‘disrespectful’.

Tomljanovic doubled down in the press conference, again questioning whether Ostapenko was actually hampered by injury.

‘There was nothing wrong with her the whole match, but then why on 4-0 she calls it? So I think that that’s a clear reason that she just wanted to get me off my game,’ the fired-up Aussie told reporters.

The rivals shook hands after Ostapenko’s victory at the Eastbourne International, a far cry from the tense scenes at Wimbledon last year

‘Then to top it all off, for her to call me disrespectful at the end of the match is laughable.

‘I think it’s disgraceful behaviour from someone that is a Slam champion, because kids look at her and they see that?

Ostapenko, who won on the clay at Roland Garros in 2017, insisted her injury was genuine – and actually worsened in the third set.

‘I think it was very disrespectful what she did. I mean, how can you say ‘liar’ or something if you know zero about my injury,’ the Latvian stated.

‘You cannot say that. In front of everybody, call me liar? I don’t think it’s respectful from her side.’

Round one action from the iconic grass courts at Wimbledon begins on June 27.