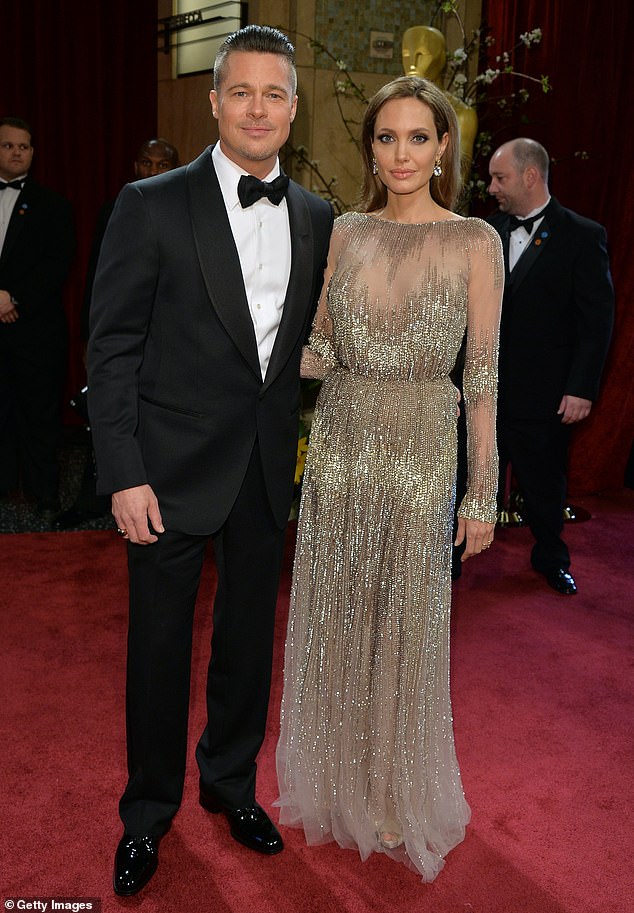 ‘It would always be at night, in the dark’: Brad Pitt admits he was tormented by a recurring dream of being violently stabbed for years after split from Angelina Jolie

Brad Pitt has revealed he was haunted by a recurring dream in which he was fatally stabbed.

The nightmares began as the actor’s marriage to Angelina Jolie began to crumble and he revealed they went on for another five years until he psychoanalysed the meaning behind it.

Pitt married Jolie in a private ceremony at their jointly owned French chateau in 2014, nine years after falling for the Hollywood star on the set of action-thriller Mr & Mrs. Smith.

But in 2016 Jolie initiated divorce proceedings following a mid-flight fracas, during which an ‘inebriated’ Pitt launched into a heated argument with the couple’s adopted son Maddox.

Nightmare: Brad Pitt says he was haunted by a recurring dream in which he was fatally stabbed following his acrimonious separation and divorce from Angelina Jolie

And the actor says that in 2015 – as his marriage began to fall apart – he was haunted by the same violent dream amid the fallout that followed in the wake of their separation, with the couple’s divorce finalised in 2019.

He told the latest edition of British GQ:  ‘For a solid four or five years there, the most predominant dream I would experience would be getting jumped and stabbed.

‘It would always be at night, in the dark, and I would be walking down a sidewalk in a park or along a boardwalk and as I’d pass under an Exorcist-like street lamp, someone would jump out of the abyss and stab me in the ribs.

Opening up: Brad reflected on his dreams during a detailed interview with the latest edition of British GQ

‘Or I’d notice I was being followed and then another flanked me and I realized I was trapped, and they meant me grave harm. Or being chased through a house with a kid I’d help escape but got pinned in on the deck—and stabbed. Always stabbed. And I would awake in a terror.

‘I didn’t understand why it/they would want to hurt me. This stopped a year or two ago only when I started going straight back into the dream and asking simply why?’

Old times: Pitt with ex-wife Angelina Jolie in 2005 blockbuster Mr & Mrs. Smith, in which they played an onscreen couple

Old times: Pitt with ex-wife Jolie at the 84th annual Academy Awards in 2012. The couple ended their marriage in 2016

However the couple divorced soon after Pitt crossed paths with Jolie on the set of action-thriller Mr & Mrs. Smith, in which they played an on-screen couple.

In 2006 the actress confirmed she was pregnant with his first child, daughter Shiloh – a double blow for Aniston, whose marriage to Pitt bore no children – with twins Knox and Vivienne following just two years later.

They married in a private ceremony at their jointly owned French chateau in 2014, nine years after falling for one another, but by 2016 Jolie had initiated divorce proceedings, to be finalised three years later.

Mitigating factors included a heated argument between an ‘inebriated’ Pitt and adopted son Maddox aboard a Los Angeles bound private jet. The actor was later cleared of any wrongdoing in November 2016.

The July/August issue of GQ is available via digital download and on newsstands  on 28th June.