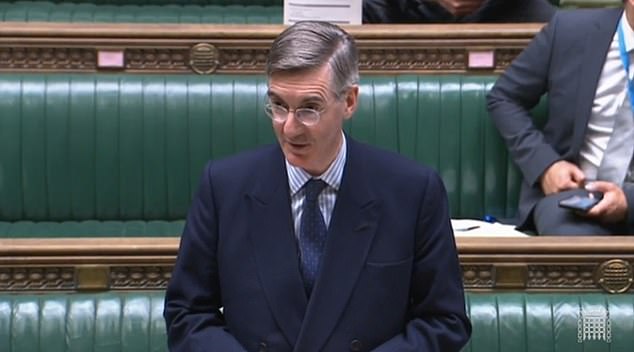 A Brexit ‘dashboard’ allowing voters to see how well the Government is doing at scrapping EU laws after the UK quit the bloc was unveiled today.

Brexit Opportunities Minister Jacob Rees-Mogg introduced the website as he set out his hopes for a ‘revolution’ to help cut the cost of living.

He told the Commons ministers will publish data every three months to show how many changes have been made to the 2,400 pieces of EU legislation still in place.

He added that the dashboard will ensure the public can ‘join us on this journey to amend, repeal or replace’ retained EU law in a bid to cut at least £1 billion of business costs from ‘EU red tape’.

Mr Rees-Mogg, making a statement to the Commons on the eve of the sixth anniversary of the EU referendum, told MPs: ‘This dashboard I hope is an opportunity to tackle hundreds of matters which might seem marginal on their own, but each of these measures in the margin will combine to usher in a revolution.

Brexit Opportunities Minister Jacob Rees-Mogg introduced the website as he set out his hopes for a ‘revolution’ to help cut the cost of living.

He told the Commons ministers will publish data every three months to show how many changes have been made to the 2,400 pieces of EU legislation still in place.

‘Not a French-style revolution with blood running in the streets and the terror of the guillotine, but a British-style revolution whereby marginal improvements moving inch-by-inch so that soon we’ve covered the feet and the feet become yards and the yards become chains and then furlongs and miles until the journey is complete.

‘With inflation running high we need to search everywhere and under every stone and sofa cushion for supply side reforms that make products and services cheaper, make things easier for business and ultimately grow the economy and cut the cost of living.

‘This dashboard therefore is the supply side reformers’ El Dorado and, naturally, I am pointing to the treasure trove of opportunity this publication represents.

‘It highlights unnecessary and disproportionate EU regulations on consumer goods such as those regulating the power of vacuum cleaners, why should that trouble Her Majesty’s Government?’

Mr Rees-Mogg added: ‘We will continue working with departments to cut at least a billion pounds of business costs from EU red tape, to ensure greater freedoms and productivity.

‘Ensuring we have the right regulation is crucial; excessive and unnecessary regulations which burden business or distort market outcomes, reduce productivity, pushing up prices and negatively affecting everyone’s cost of living.’

‘It’s quite extraordinary that on the day that inflation tops 9 per cent, the cost of energy is soaring, families facing massive pressures wondering how they will put food on the table, prices rising at the fastest rate of increase for 40 years, the Government’s offer today to the British people is a digital filing cabinet of existing legislation, which the gentleman describes, in his own words, as marginal.

‘And while the Government plans to cut 20 per cent of civil servants, the minister for so-called Government efficiency is running his own make-work scheme in the Cabinet Office, creating tasks for them to satisfy his own obsessions.’

He added: ‘The reality is that gimmicks do nothing to address the real challenges that the public face today.’