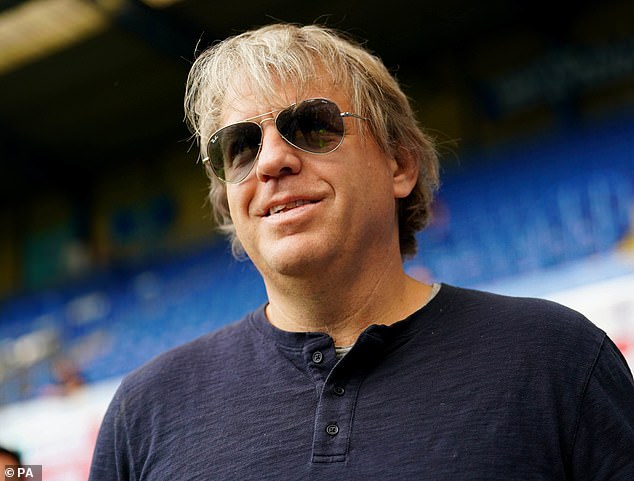 New Chelsea owner Todd Boehly has installed himself as the club’s interim sporting director after they confirmed the departure of Marina Granovskaia.

The Blues have announced that Granovskaia, who oversaw Chelsea’s recruitment under former owner Roman Abramovich, will follow ex-chairman Bruce Buck in leaving the Stamford Bridge club as part of the restructuring of their hierarchy.

New co-owner Boehly has been confirmed as the club’s new chairman but will also lead the way on Chelsea’s recruitment as interim sporting director until a permanent replacement is appointed, with manager Thomas Tuchel also handed increased say.

Chelsea will continue to be able to call on Granovskaia until the closure of the summer window.

In a statement, the club said she will will ‘remain available to Boehly and the club for the duration of the current transfer window’ to help Chelsea pursue their targets, which includes Manchester City winger Raheem Sterling.

Alongside Boehly, fellow co-owners Behdad Eghbali and Jose Feliciano – of Clearlake Capital, Mark Walter, Hansjorg Wyss and Jonathan Goldstein have all been appointed to Chelsea’s new board.

They will be joined by Barbara Charone, Lord Daniel Finkelstein and James Pade.

Boehly and Clearlake Capital appear determined to draw a line under the Roman Abramovich regime, with the three most senior personnel – Buck, Granovskaia and chief executive Guy Laurence – all leaving the club.

Buck’s departure was confirmed last Monday, and Granovskaia’s had been expected before the announcement from the club on Wednesday.

Granovskaia, in her role under Abramovich, had been lauded as ‘football’s best club director’.

The Russian-Canadian business executive has effectively run the club on a day to day basis. According to their website, she has ‘acted as a representative of the owner at the club and in support of the board of directors’ since her arrival in 2010.

Sportsmail revealed earlier this week that Buck and Granovskaia are set to lose out on millions in bonus payments following their departures.

A significant part of the £50million package agreed with Boehly for their work on the sale was tied to them continuing at Stamford Bridge after the takeover, and will therefore not be paid in full.

Buck and Granovskaia will still receive millions in transaction fees from the new ownership, but the speed of their exits from the club this week has taken many by surprise.

Despite stepping down as chairman, Buck will continue to support the club as a senior advisor

Boehly and his consortium have been hands-on since the completion of their takeover and were already involved in transfer negotiations.

Their next job will be to find a permanent sporting director and to appoint a chief executive.

‘As custodians of Chelsea FC, we now begin executing our long-term vision and plan for the Club, creating an outstanding experience for its passionate, loyal fans, and continuing to challenge for top honours in line with Chelsea FC’s decorated history,’ Boehly said.

‘Working together, side-by-side, we are firmly committed to winning, both on and off the pitch. For us, that effort has begun.

‘We thank Marina for her many years of excellent service to the Club and wish her all the best in her future ventures.’

Chelsea were a club in turmoil off the pitch following Russia’s invasion of Ukraine.

Abramovich’s sanctioning led to the club being unable to sell match-day tickets, negotiate new contracts for players or work on signing new additions to the squad.

Tuchel’s side, who finished third in the league last season, are expected to be busy under Boehly this summer.

Antonio Rudiger and Andreas Christensen have departed the club, while Cesar Azpilicueta, Romelu Lukaku and Marcos Alonso could all follow out the exit door.

Chelsea have been linked with the likes of Sterling, Richarlison and Ousmane Dembele, while Jules Kounde could be recruited to bolster their defence.