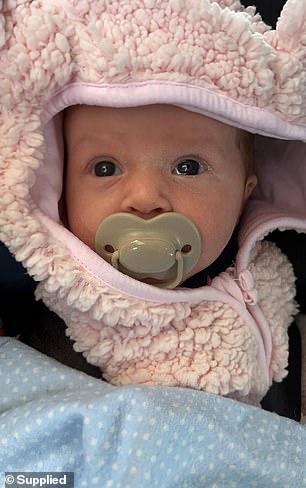 A first-time mum has revealed the terrifying moment she thought her newborn daughter would lose a toe, after a piece of her hair got wrapped tightly around it.

Mum Lia Marshall was getting her daughter Amelie ready for bed when she noticed the two-month-old’s toe was red and swollen.

Amelie was fussing a little more than usual and her middle toe ‘looked angry’ but the cause was not immediately obvious, the mum explained.

Then, on further inspection, Lia realised one of her hairs had managed to wrap itself around the baby’s toe as they muddled through their bedtime routine.

A first-time mum has revealed the terrifying moment she thought her newborn daughter would lose a toe, after a piece of her hair got wrapped tightly around it

‘I couldn’t see the hair at first, just the crease from where it had wrapped around her toe,’ she said.

When a hair cuts of circulation it is known as hair tourniquet syndrome, and can cause irreparable damage.

Lia had given the baby a bath and sat her on the couch where she was getting ready to put her winter pyjamas on when she noticed the sore foot.

At first she tried to scratch it away with her nail but when that didn’t work panic began to set in.

‘It was really scary I’m glad her toe was okay I was so scared she was gonna end up losing it,’ she said.

By this time the youngster had clocked something was wrong and was screaming in pain.

So Lia took the youngster to the hospital where doctors were able to remove the hair.

What is a hair tourniquet?

Hair tourniquet syndrome occurs when a strand of hair or thread wraps tightly around a body part such as the fingers, toes, or genitals.

It’s a relatively rare condition in adults but much more common in babies and toddlers.

If left untreated, hair tourniquet syndrome can cause pain, long-term injury, and loss of function in the affected body part.

The condition can affect any body part but is most common in the toes, fingers, and genitals. Cases of hair wrapped around fingers usually occur from birth to 19 months of age, while penile hair tourniquets are most common from 4 months to 6 years of age.‌

It’s unknown exactly what makes the hair or thread wrap around the appendage. One possible explanation is that repeated movement of the body part in a restricted space — toes in pajamas, for instance — causes the hair to wrap around tightly.‌

The hair may be hard to see because once it cuts through flesh, the surrounding skin can grow over the wound. Stay alert to signs of increased discomfort, irritability, and crying.

But not before it had cut Amelie’s skin, causing her sore toe to bleed profusely once the pressure was released.

Doctors cleaned the wound and the baby started to calm down before spending three hours under observation.

When the plastic surgeons were confident there would be no long lasting damage they allowed the mum and baby to go home.

‘She is fine now, you almost wouldn’t know if there wasn’t a crease on her toe,’ Lia said.

But the terrifying incident has been a huge wakeup call for the mum who has added strands of hair to the list of things which can harm her baby.

‘I have learned my lesson and will definitely keep checking her toes for hairs,’ she said.

She is sharing her story to make sure other parents know how serious a rogue, tightly-wound hair can be.

‘If you have a baby please check their fingers and toes! I’d hate to think how bad it would have been if I hadn’t have spotted it last night,’ she said.

Doctors told the mum the emergency – known as a hair tourniquets is very common in young babies.

The cream should only be used if the hair hasn’t broken the skin, and should safely dissolve the hair and return circulation.

Baby boys’ genitals can also be effected by hair tourniquet’s.