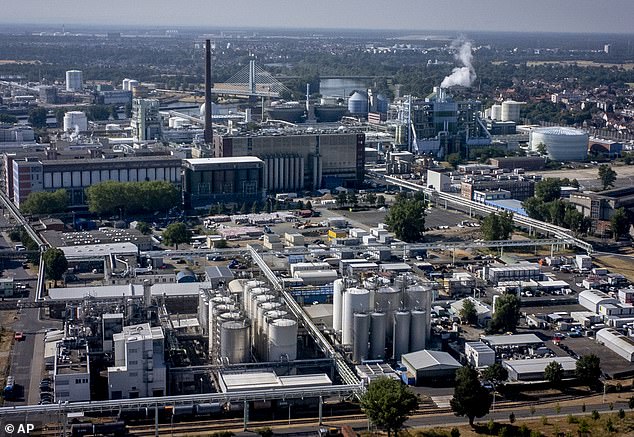 Germany says gas is ‘now a scarce commodity’ and has raised the alert level to ‘alarm’ under its emergency plan due to dwindling supplies from Russia.

Triggering phase two brings Germany a step closer to the third and final stage that could see gas rationing in Europe’s top economy.

‘Gas is now a scarce commodity in Germany,’ Economy Minister Robert Habeck told reporters, as he declared a national ‘crisis’.

Russia was using gas ‘as a weapon’ against Germany in retaliation for the West’s support for Ukraine following Moscow’s invasion, Habeck said.

‘It is obviously Putin’s strategy to create insecurity, drive up prices and divide us as a society,’ he added. ‘This is what we are fighting against.’

Germany, like a number of other European countries, is highly reliant on Russian energy imports to meet its needs.

Russian energy giant Gazprom last week significantly reduced supplies via the Nord Stream pipeline to Germany by 60 percent due to what the company said was a delayed repair.

While gas storage facilities are currently filled to 58 per cent capacity in Germany — higher than at this time last year — the goal of reaching 90 per cent by December won’t be achievable without further measures.

The second ‘alarm’ level under the government’s emergency plan reflected a ‘significant deterioration of the gas supply situation’, Habeck said.

At the ‘alarm’ level, Germany is still considered to be in a position to ‘manage’ the situation for the time being.

Habeck said that households ‘can make a difference’ by saving energy, as Germany launches a campaign to encourage gas saving measures.

Germany has managed to reduce the share of its natural gas supplied by Russia from 55 per cent before the invasion to around 35 per cent.

Europe’s largest economy has also sought new sources of supply, and accelerated plans to import gas into the country by sea in the form of LNG.

In Germany’s second stage, the market is still able to function without the need for state intervention that would kick in the final emergency stage.

‘We have seen some serious cuts already,’ a gas trader in Europe said. ‘The system is still coping, but there’s not much left,’ he said.

Germany, like a number of other European countries, is highly reliant on Russian energy imports to meet its needs

Nord Stream 1 is due to undergo maintenance on July 11-21 when flows will stop.

Russia may cut off gas to Europe entirely to bolster its political leverage, the head of the International Energy Agency (IEA) said on Wednesday, adding Europe needed to prepare now.

Russian gas flows to Europe via Nord Stream 1 and through Ukraine were stable on Thursday, while reverse flows on the Yamal pipeline edged up, operator data showed.

Several European countries have outlined measures to withstand a supply squeeze and avert winter energy shortages and an inflation spike that could test the continent’s resolve to maintain sanctions on Russia.

The supply cuts have also driven German companies to contemplate painful production cuts and resorting to polluting forms of energy previously considered unthinkable as they adjust to the prospect of running out of Russian gas.

The European Union on Wednesday signalled it would temporarily turn to coal to plug energy shortfalls, while describing Moscow’s gas supply cuts as ‘rogue moves.’

The bloc’s climate policy chief Frans Timmermans said on Thursday that 10 of the EU’s 27 member countries have issued an ‘early warning’ on gas supply – the first and least severe of three crisis levels identified in EU energy security regulations.

‘The risk of full gas disruption is now more real than ever before,’ he said.