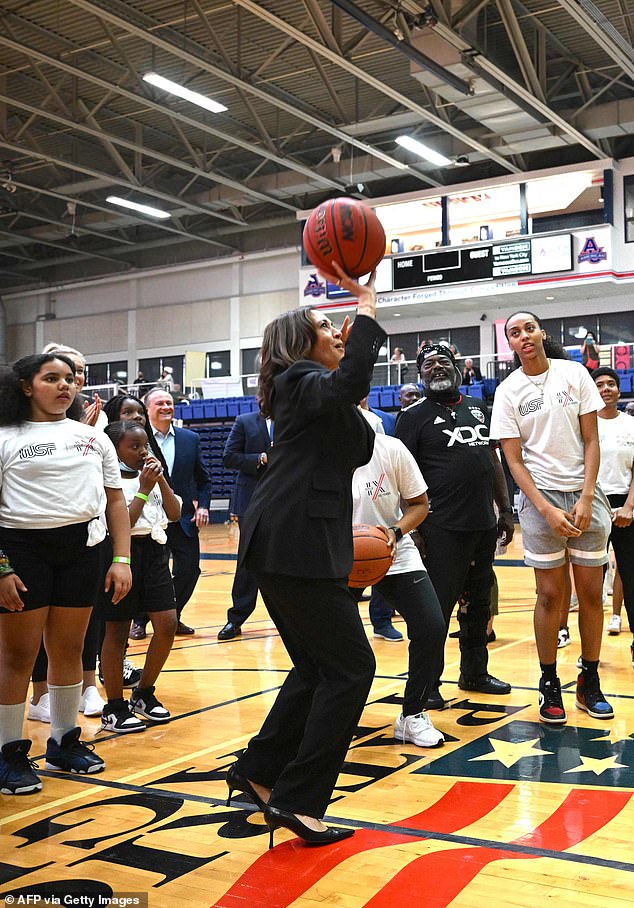 Harris, with Second Gentleman Doug Emhoff in tow, surprised D.C. middle schoolers who had gathered for a ‘field day’ event on the campus of American University.

The vice president, wearing a black pantsuit and stiletto heels, tried shooting hoops – and eventually got the ball in the basket on the sixth try.

Vice President Kamala Harris – sporting a black pantsuit and stiletto heels – tried shooting hoops Wednesday at an event marking the 50th anniversary of Title IX on American University’s campus. She eventually got the ball in the basket on the sixth try

Field Day was hosted by the U.S. Department of Education and the Women’s Sports Foundation.

In another area of the gym, some of the girls had been working on a science experiment about electrolytes with the Girl Scouts, which Harris also checked out.

Earlier Wednesday, Dr. Biden joined tennis legend Billie Jean King for a State Department-sponsored event at D.C.’s Capital One Arena to mark the 50th anniversary of Title IX – as well as the 10th anniversary of the Department of State-espnW Global Sports Mentoring Program.

BEND YOUR KNEES: Vice President Kamala Harris made the shot on the sixth try as a crowd surrounded her in the American University gym

‘Fifty years, Title IX created space for for girls and women to be more. To be bigger and brighter and stronger and smarter and more capable and couragous,’ Dr. Biden said. ‘It’s made our schools and our colleges become more fair.’

‘Title IX is who we are as a nation,’ the first lady, who is a community college professor, told the crowd.

King urged the government to ensure schools are complying with Title IX.

‘The primary benficiaries of Title IX have been white, suburban girls,’ the tennis star said.

‘Let’s use this milestone anniversary to reenergize our focus on strengthening and advancing equity and opportunity for all girls and women – but espeically those who have been left behind by the law, including girls of color, girls with disibilities, trans athletes and all LGBTQ+ youth,’ King continued.

‘We have to look forward,’ she added.

The inclusion of trans women in women’s sports has become a hot button issue, with a number of Republican candidates bringing it up in stump speeches this political cycle.