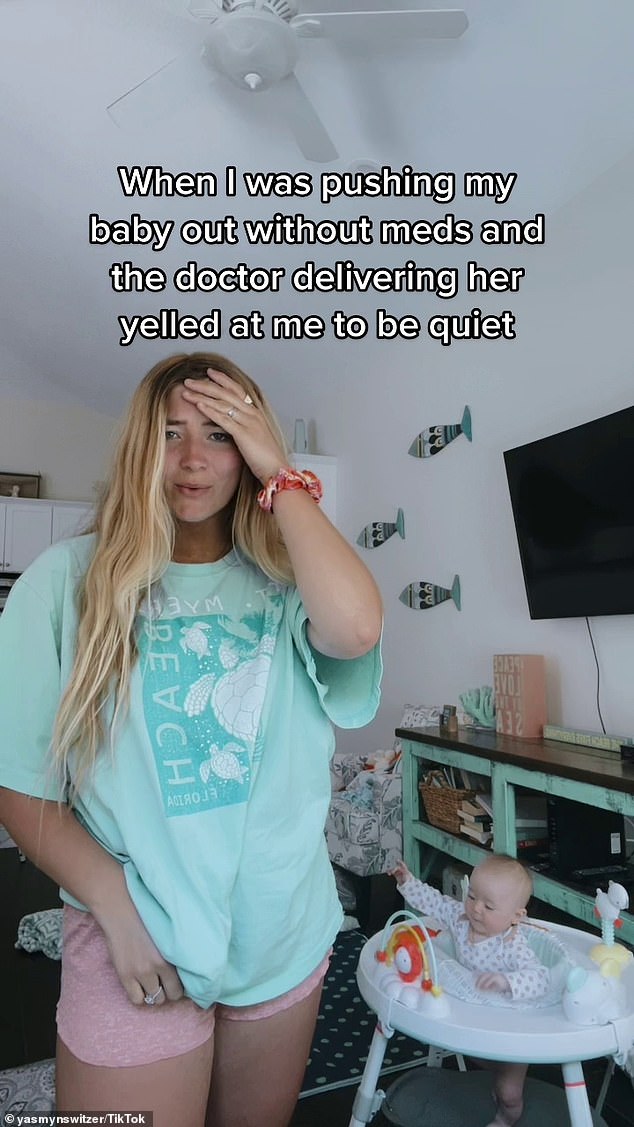 Mum-of-three, 21, claims a female doctor ‘yelled at her to be quiet’ during drug-free labour because she was moaning too loudly: ‘It completely threw me off’

A young mum-of-three has told of the ‘rude’ moment her doctor told her to be quiet while she was giving birth.

Yasmyn Switzer, from the US, went viral on TikTok for sharing her experience in a video which has racked up more than 5.2million views and hundreds of shocked comments.

‘When pushing my baby out without meds and the doctor delivering her yelled at me to be quiet,’ the 21-year-old wrote in the clip as she mouthed the lyrics ‘What did you say?’ to a song.

Yasmyn Switzer (pictured) from the US, went viral on TikTok for sharing the shocking moment a doctor yelled at her to be quiet while she was giving birth

The comment was made when Yasmyn was giving birth to her third child Millie (pictured centre). Yasmyn (right) with her fiancé Logan and daughters Analia, 2 and Laela, 4

‘I was in a perfect rhythm and this completely threw me off,’ the viral video’s caption read.

The 21-year-old posted a follow-up video detailing the moment saying she was ‘pretty mad’ at the doctors and nurses who tended to her while giving birth to her third daughter, Millie, who is now seven months.

‘I was super nice and even in labour I’m not the type of person to be cursing at the doctors and confrontational,’ she said.

‘The other nurse was teaching her how to check how dilated I was on me while I was in labour,’ she recalled.

‘I honestly was really uncomfortable with this and I didn’t really know what was going on they didn’t tell me what they were really doing beforehand.’

Yasmyn said the doctor then came in after her water broke before she had started pushing.

‘As I’m pushing, I’m not screaming, like high pitched screaming or even being that loud but I’m moaning along when I’m pushing my daughter out. I’m just listening to my body as far as pushing with the contractions and everything,’ she said.

‘In the middle of one of my contractions, as I’m pushing her out, I’m making noise and the doctor goes something along the lines of, “I’m going to need you to be quiet so that I can hear”.’

Yasmyn was shocked by the ‘rude’ request from the doctor who she said she had experience with during her previous pregnancies and ‘not always had the best bedside manner’.

‘I blacked out for a minute after she said that because I completely lost my focus and rhythm with my pushing but luckily one of the nurses snapped me back into focus was like, “Just hold your breath and push”,’ she said.

‘I just looked at the ceiling and just pushed her out… I was pretty mad about the experience with the doctors and nurses.’

Both of Yasmyn’s videos quickly went viral and attracted a barrage of comments from viewers with some urging her to make a formal complaint.

‘MAKE! A! COMPLAINT!’ one mum exclaimed and another wrote: ‘I would write the hospital a letter. So uncalled for! Especially at such a vulnerable time for you’.

‘What is it that she needs to “hear”? This story makes me mad. I’m sorry this is your experience,’ a third responded.

‘Girl file those complaints, get people held accountable so no one else has to deal with that,’ asserted a fourth.