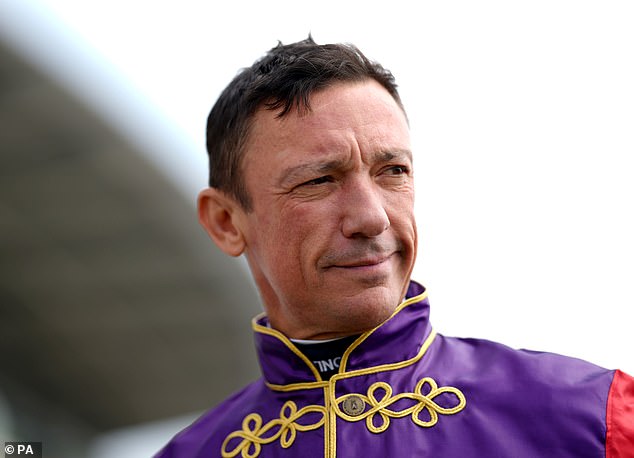 Frankie Dettori says he intends to ride until at least the end of the 2023 Flat season, as the shockwaves prompted by his split with the stable of John and Thady Gosden spread through racing.

News of the professional divorce emerged on Friday evening but with the impeccable timing that has been a hallmark of Dettori’s 35-year career, the Italian won on his only ride at Newmarket on Saturday when the Ralph Beckett-trained Lezoo landed the Listed Maureen Brittain Memorial Empress Stakes.

The crowd, which had applauded Dettori into the paddock, gave him a rousing reception on his return to the winner’s enclosure and were treated to the 51-year-old jockey’s trademark flying dismount — a celebration normally restricted to Group One race wins.

On Saturday it appeared an action laced with symbolism — a reaction saying, ‘Don’t write me off’. Dettori said: ‘I’m not going to retire. I’m definitely intend to ride this year and next year and after that I don’t know.

‘I’m riding in Instanbul tomorrow in the Derby. I’m suspended most of next week but I’ll ride in the German Derby the week after that. Then I am going to America for Charlie Appleby and have a couple of weekends in Belmont and possibly Saratoga, so I am pretty busy in the next month.

‘It is a new start and we will take it a step at a time. I will be back King George week and then on to (Glorious) Goodwood.

‘Me and John had a meeting yesterday and we decided to give each other a break — a sabbatical. We are still good friends. For what John has done for me in the past I will forever be grateful but at the moment we have decided it is better for the pair of us to be apart.’

The term sabbatical was also used by Gosden in his statement after he had met with Dettori on Friday.

But it hard to find anyone who believes that normal relations will be resumed after heads have cleared, and Dettori is privately said to be devastated.

When predictions were made at the start of the season the idea of a Dettori-Gosden split six days after Royal Ascot would not have been on the most powerful radars.

Their last few seasons together have delivered some memorable moments, including two wins in the Prix de L’Arc de Triomphe with wonder-mare Enable, a Derby and another Arc with Golden Horn and three Ascot Gold Cups with Stradivarius.

But as we approach major fixtures including Newmarket’s July meeting, Ascot’s King George fixture and Glorious Goodwood, the Gosdens are looking for new jockeys for the likes of Emily Upjohn, Inspiral and Stradivarius, and Dettori has reached potentially the most difficult crossroads of his career.

It is not a completely fresh start but most of Dettori’s eggs have been in one basket.

Even for a three-time champion jockey who is widely acclaimed as one of the sport’s all-time greats, it represents a test of his desire as he tries to forge new alliances.

Dettori has picked up some useful mounts from Aidan O’Brien in the last few seasons, including Classic wins with Mother Earth (1,000 Guineas) and Snowfall (Oaks) last year. But during 2021, Ireland’s champion trainer handed Dettori only 10 rides in Britain. It was the Gosden stable which supplied 121 of his 194 British rides as well as 31 of his 41 domestic winners and a conveyor belt of big-race ammunition.

Since his long-time agent Ray Cochrane retired, Dettori has booked his own rides because his portfolio of mounts has been so manageable as he chose them carefully, concentrating on quality with the schedule of a part-time rider compared to his colleagues.

Without the Gosden backing that will not be so easy, especially when balanced against Dettori’s extensive commercial commitments away from the track.

How much those distractions played in Dettori’s divorce from the Gosden operation can only be speculated upon but there have been suggestions of simmering tensions behind the scenes which surfaced at the royal meeting.

When Gosden mentioned Dettori’s trip to Italy for a wedding the week before Royal Ascot, it was hard not to interpret it as a comment about the Italian’s commitment to the cause a week before the biggest fixture of the season.

When things go wrong on the track, as they did last week — particularly on the beaten ride on Stradivarius in the Ascot Gold Cup — something snaps.

Gosden has said he will not appoint a stable jockey for the rest of this season and that might make the rest of the year a set of auditions, with Hollie Doyle and David Egan potential candidates. Dettori, meanwhile, will be hoping the big hurrahs are not all behind him.