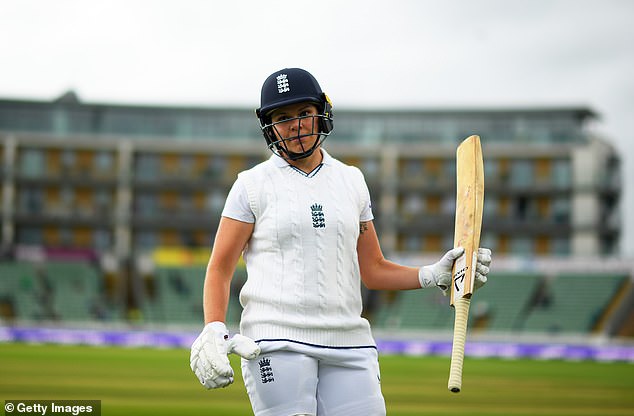 Alice Davidson-Richards said scoring a Test century on debut was ‘bloody brilliant’ as Nat Sciver also hit a ton to take England to 328 for six against South Africa.

Davidson-Richards hit 107 in the women’s Test at Taunton before being caught at point from the final ball of day two as she became the first England cricketer, male or female, since WG Grace to score a century and take a wicket on Test debut.

The Surrey Stars player was helped by her former school and hockey team-mate Sciver, who made an unbeaten 119 to guide England out of trouble after they slipped to 121 for five.

They finished with a 44-run lead and for the debutant it was a dream come true.

‘It was bloody brilliant,’ said Davidson-Richards. ‘It means a lot having Nat there. From when we started driving up to Loughborough years ago to being out there playing a Test is really, really special.’

England have put themselves in a good position to win their first Test 2014 — and first at home since 2005 — and Sciver wants them to push on. ‘There were comments that didn’t support women’s Tests,’ she said.

‘That isn’t something we agree with, so we are playing in the limelight after that and want to push for a result.’