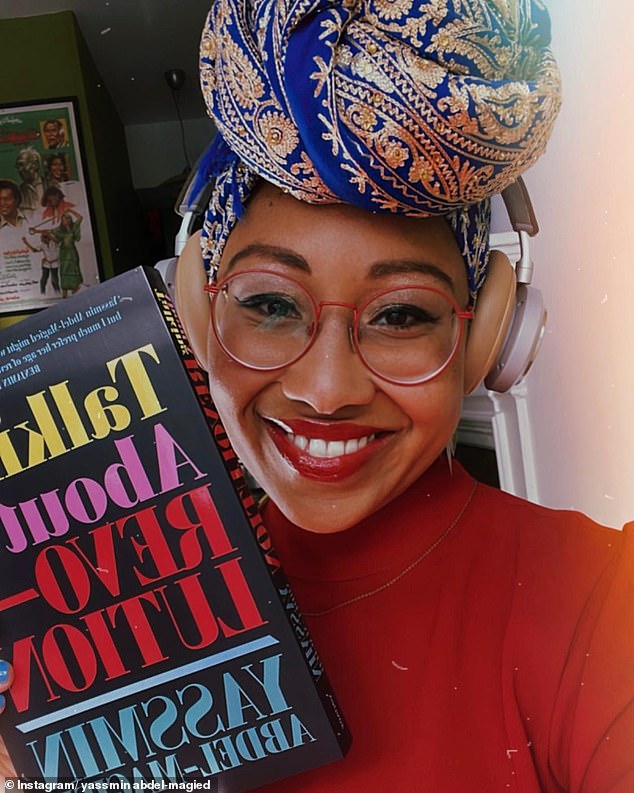 An Australian writer living in London, who branded herself ‘the most publicly hated Muslim’, has faced a backlash from furious Brits after complaining the sea of Union Jack flags seen across the capital for the Queen’s Jubilee was ‘a waking nightmare’.

Yassmin Abdel-Magied received a furious letter from a ‘very offended indigenous British woman’, urging her to leave the UK over her comments regarding last month’s royal celebrations.

The activist – who fled her homeland for Britain shortly after receiving an onslaught of criticism for an Anzac Day Facebook post – took to social media to show off the correspondence but received further criticism from followers.

The woman who penned the letter accused Ms Abdel-Magied of being an ‘engineer of social discord and division’.

‘This country, that you insult, has given you a home and opportunities and the freedom to sprout your disgusting comments – which I found very offensive,’ the letter read.

Yassmin Abdel-Magied received a furious letter from a ‘very offended indigenous British woman’, urging her to leave the UK over her comments regarding last month’s royal celebrations

Yassmin Abdel-Magied: The writer and activist who regularly causes a storm on social media

Yassmin Abdel-Magied is a Sudanese-Australian writer and activist who now lives in London.

Described on her website as an ‘award-winning social advocate’, she has published four books, written two plays and is currently developing a number of projects for screen.

However, her posts on social media have often left her in hot water – most notably when she tweeted ‘Lest. We. Forget. (Manus, Nauru, Syria, Palestine)’ on Anzac Day in 2017.

She quickly deleted the post and apologised, but many Australians were left outraged she hijacked the national day of remembrance to make a political statement.

Ms Abdel-Magied then moved to London, which she claimed was the safest place for someone of her background and religion.

But the activist was labelled ‘racist’ by social media users for saying New York is too ‘Anglo-centric’.

She then asked the activist, if she was so offended by the presence of British flags, why she wouldn’t move.

‘Please, don’t let us stop you, I’m sure your fellow countrymen/women would love you to return there and support them,’ the letter read.

‘Freedom of speech? Don’t let the door hit your a**e on the way out. Bit like Australia huh?’

Ms Abdel-Magied shared the letter on social media with a bunch of laughing face emojis.

‘Not an offended Brit sending me a strongly worded letter because she didn’t like one of my tweets. A literal physical letter y’all,’ she wrote.

Ms Abdel-Magied was hit by a wave of criticism after she dragged the Queen’s Jubilee celebration.

‘Dude no. Bunting is a lovely, lovely British tradition. Once you’ve done a few more winters & non-summers you will – as I did when I lived there – long for a bright bit of fabric waving sadly in the drizzle,’ one wrote.

While another said: ‘If you don’t like it move out but don’t come back to Australia. I hear you are giving up your Australian citizenship, great news.’

A third commented: ‘Why do you feel some flags are like ‘a waking nightmare’?’

The activist moved to Australia from Sudan when she was 18 months old but left for England in 2017 after causing outrage with a social media post about Anzac Day which read: ‘Lest. We. Forget. (Manus, Nauru, Syria, Palestine)’.

Furious commenters fired back at Abdel-Magied’s remark, with some telling her to ‘go back to Australia’

Ms Abdel-Magied last month released a new book titled ‘Talking about a revolution’, which is a collection of new and revisited essays on resistance, transformation and revolution.

Her book also speaks on the concept of identity from a migrant by ancestry, and by choice.

In 2019, Ms Abdel-Magied claimed a life in London was the safest place for someone of her background and religion, asking the public where else they recommended.

”’Why did you move to London?” someone asked me recently,’ she wrote on Twitter.

‘Because where else is safe for a black Muslim woman who wants to live alone and do her own thing?

‘We couldn’t think of anywhere else (except maybe NYC, but it’s all a bit Anglo-centric). What do you think? Where else?’

She was flooded with a range of responses with many suggesting European countries such as France, Italy and Scotland.

Many commented saying lots of places weren’t safe for a Muslim woman, including New York City in the USA

Ms Abdel-Magied was quick to shut down the suggestion of Paris, claiming the city is ‘pretty terrible for Muslims and black folk’.

‘NYC is not safe, lots of hate crimes reported against Muslim women,’ another person wrote.

The 2015 Young Queenslander of the Year responded by saying many of the places suggested were not accessible for her.

‘Other thoughts that are important: not all places being suggested are easily accessible visa wise, especially if someone doesn’t have the ”right passport” or ”right job”,’ Ms Abdel-Magied wrote.

‘You move to majority white Anglo countries and complain about them being Anglo-centric!? You really are an ungrateful racist person,’ the person said.