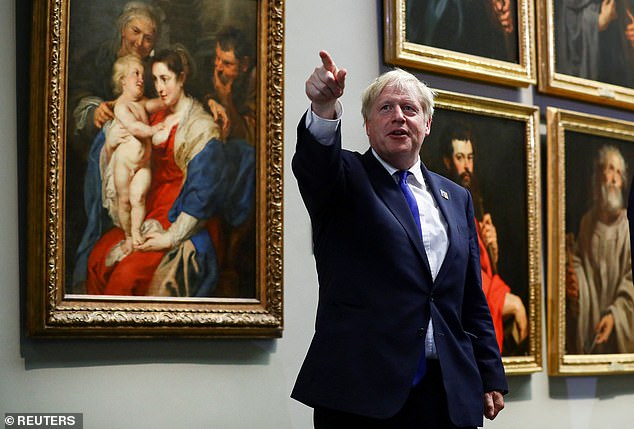 Boris Johnson has refused to rule out a snap election, despite warnings the public just want him to get on with the job.

The Prime Minister yesterday declined three times to say if he would seek a fresh mandate from voters to boost his authority.

The next general election is not expected until 2024 – and could be held as late as January 2025. But after MPs repealed the Fixed-term Parliaments Act, the Prime Minister has the power to call one at any time.

An early election would be a major gamble for Mr Johnson as Labour has been consistently ahead in the polls.

Speaking as he attended the Nato summit in Madrid, Mr Johnson told reporters: ‘I’ve got to recognise that years and years ago, I used to do the kind of jobs that you all do now, and it was a great, great life and a great privilege. What you are able to do is offer opinion, commentary, analysis, predictions about politics… I’ve got to recognise I’m no longer a member of that sacred guild.

‘It would be a demarcation dispute for me to cross over and start talking about politics. I’ve got to talk about my programme for government, about policy, and what I’m doing to take the country forward.’

Pushed on whether he was ruling out an early election, Mr Johnson replied: ‘I’m just saying, I don’t comment on those sorts of things. The idea hadn’t occurred to me, if you really want the truth, because I’m focused on getting through the cost of living pressures, developing and improving, widening our plan for a stronger economy, and making sure that we continue to offer leadership on some of the tough global issues the world faces.’

Asked again, Mr Johnson said: ‘Oh, for heaven’s sake! I am not offering commentary, what I’m trying to get over to you is that I’m here to comment on policy, on the agenda of government.’

The Prime Minister’s allies last night said they believed there might be a backlash from voters if Mr Johnson called another election.

A source said: ‘The PM won an 80-seat majority, people want us to use it to get s*** done, rather than hold another vote.’

Some in the Conservative Party believe Mr Johnson would be more likely to call an early election if Sir Keir Starmer is forced to resign over Beergate and a leadership contest leads to Labour shifting further Left.

Former Labour minister Peter Mandelson said yesterday that tactical voting between Labour and the Liberal Democrats will sweep the Tories from office at the next election.

He said there was no need for a formal pact because the opposition parties’ supporters would vote to oust the Conservatives anyway.

Writing in the Spectator, Lord Mandelson also warned that Sir Keir Starmer needed to up his game because voters had ‘no clear idea’ who he was.

He said: ‘Labour and the Liberal Democrats have a very good chance of wiping out the Conservatives’ parliamentary majority next time, whether Johnson remains leader or not.’

Mr Johnson has admitted he is ‘actively thinking’ about a third term as PM, which would see him remain in Downing Street until the ‘mid-2030s’.