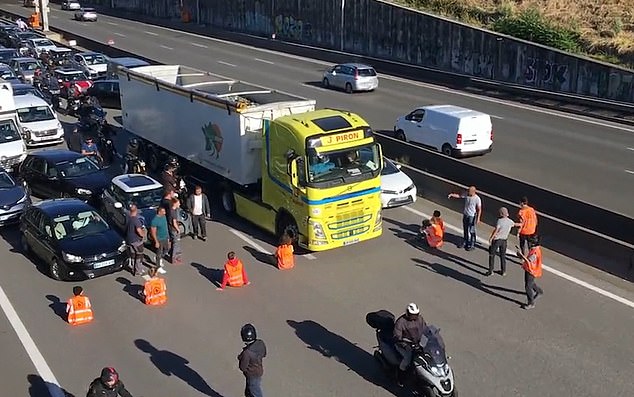 No surrender to the eco-mob in France! Hero drivers and police drag climate change activists off the road as they attempt to block traffic near Paris

A busy motorway near Paris was brought to a standstill by environmental protesters who sat in the middle of the road this morning.

A video shows activists being repeatedly dragged out of the road by angry drivers headed to the French capital.

Despite the efforts of commuters, kilometres of traffic formed along the A13 motorway as the demonstration was prolonged by the high-vis-clad group, who kept shuffling back into the middle of the road.

The group behind the protest is ‘Dernier Rénovation’, the French equivalent to Insulate Britain, who campaign for the thermal renovation of buildings.

Motorbikes and several vehicles were able to past the blockade by Saint-Cloud, but it wasn’t entirely cleared until around 9:30am this morning when police intervened.

The group Dernier Rénovation blocked the A13 at 8:30am for around an hour by sitting in the road

The police arrived at 9:30am and were able to clear the blockade, though kilometres of traffic had built up

The group walk across a lane of traffic so they can block the vehicles headed towards the capital.

The sit down in front of the cars and unfurl banners, but they are very quickly met by motorists who start dragging their banners and them away.

Some cars and motorbikes get through while the activists keep trying to block the road, despite the police presence.

Eventually the blockade is ended and cars are able to drive towards Paris.

Dernier Rénovation posted a photo showing three activists holding a banner, sitting on the roadway around 8:30 this morning.

They said: ‘This morning, nine citizens returned to civil resistance with Last renovation. The blockers blocked the A13 for more than an hour.

‘The blockage led to the temporary closure of the A13 towards Paris.

‘On the day after the opening day of the new parliament, we remind Members of their historic responsibility.

‘If they do not adopt courageous measures commensurate with the challenges, they condemn the French men and women to live with mass starvation and massacres. Chaos is inevitable if we don’t act now.’

The group state on their website that their goal is to force legislation to ‘drastically reduce France’s emissions’, starting with energy renovation.

Yesterday on the opening day of parliament in France, members from the group glued themselves to the cobblestones in front of the National Assembly.

The road-block protest tactics are used across Europe, in Rome earlier this month a similar group sat across the city’s main ring-road.

In an almost identical situation the irate Italian motorists at the front of the queue jumped out of their vehicles to drag the protesters out of the way.

According to Italian publication Corriere Dello Sport, the young protesters were part of an Extinction Rebellion off-shoot group called the ‘Last Generation’ campaign.

The group is calling for the end of all fossil fuel extraction projects, and is demanding that Italy does not restart its coal plants – and instead develop more wind and solar energy sources.

Protest groups in the UK, such as Insulate Britain, Just Stop Oil and Extinction Rebellion, have been causing nightmares for drivers by going one step further and glue themselves to the road.